1 of 11 portraits of Frederick Walker 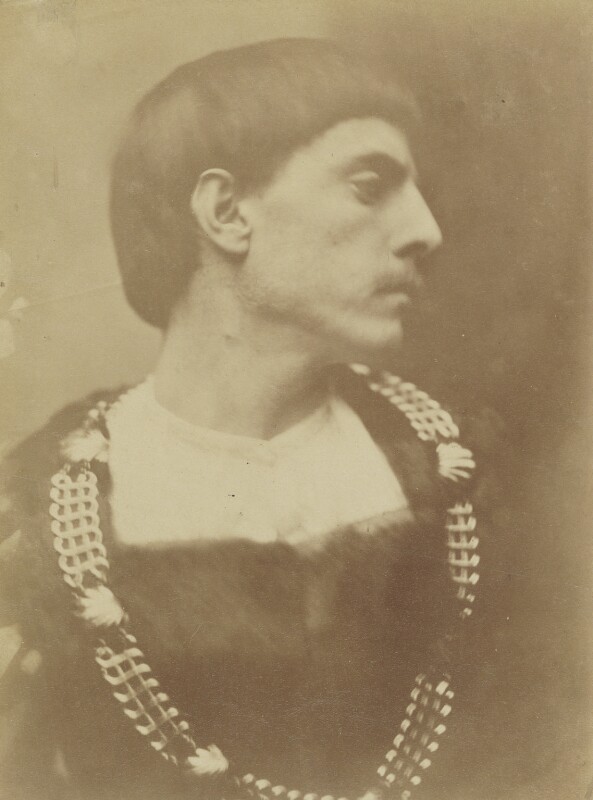 This image was created during the early 1860s by David Wilkie Wynfield for his series of artists portrayed in historical and contemporary costume, many of which were released for sale from March 1864 under the title The Studio: A Collection of Photographic Portraits of Living Artists, taken in the style of the Old Masters, by an Amateur. Although a somewhat later recruit to the St John’s Wood Clique, who comprised most of Wynfield’s sitters, Frederick Walker was their close associate.

There are two known variant photographs of Walker in costume taken by Wynfield, one of which was released – together with the portraits of Henry Wyndham Phillips, F.R. Pickersgill and William Holman Hunt – in Part 4 of The Studio, ‘After the Venetian School’. It is not known whether this image was so designated, but the profile pose and costume, in particular the shirt over a square-necked tunic, are reminiscent of Titian’s portrait of Jacopo Sannazaro in the Royal Collection (RCIN407190). One early commentator identified the image differently, claiming that ‘from Frederick Walker’s beautiful profile Wynfield evolved a young Florentine painter’. [1]

The image was in existence by February 1864, when George du Maurier remarked on Wynfield’s ‘splendid’ costume photographs, writing ‘You should see Lewis, Leighton, Calderon., Prinsep, Walker! Quels grands seigneurs!’ [2] George Frederic Watts also commended Wynfield’s depiction of Walker, when he wrote to Julia Margaret Cameron, ‘The jewel of perfection I speak of is best found because it exists in connection with extraordinary artistic qualities in some 3 or 4 of Winfield’s [sic]: Val, Fred Walker & Oldham Barlow and one or two others.’ [3]

The other Wynfield pose (Royal Photographic Society, Bath, 1992p) shows Walker full-face wearing the same decorative chain and holding a cup-and-ball novelty game. [4] Evidence that this pursuit was a personal favourite appears in Du Maurier’s novel Trilby (1894), in which Walker is glimpsed ‘gravely playing cup and ball … so well (with either hand) that [he] might have been [a] professional champion’. [5] Bevis Hillier, however, sees the tragic figure of Hamlet in this image of Walker. [6]

Walker’s liking for theatrical costume was noted by Henry Stacy Marks, who recalled a party where Walker arrived in costume, making ‘a comical figure as Orson – a pocket Hercules, clad in bear-skin and carrying a club of enormous proportions’. [7] Walker’s penchant for historical dress is further illustrated in a series of cartes-de-visite (see ‘All known portraits, Photographs’) where he appears as Robespierre, wearing ‘Directoire dress’, [8] a costume Marks described as ‘boots, knee-breeches, and short-waisted tightly fitting coat show[ing] off his symmetrical figure to advantage’. [9]