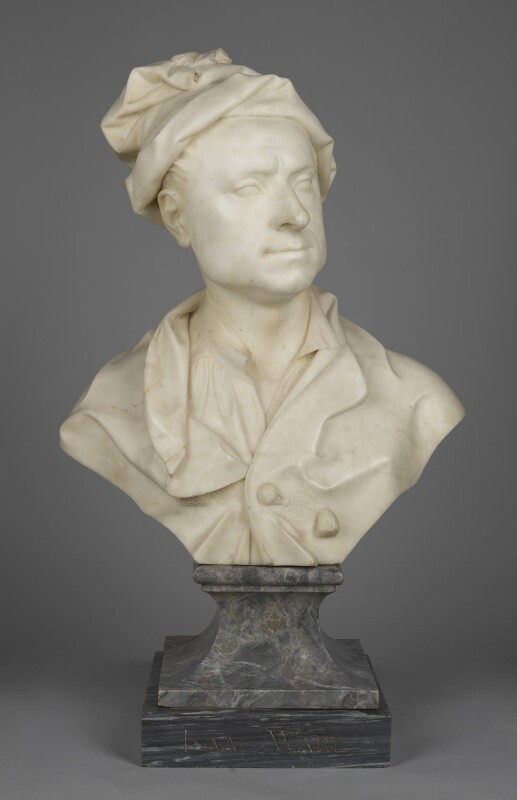 Incised on the front of the socle in gold capitals: ISAAC WARE.

Vertue notes, probably after a visit to the sculptor's studio, between 2 June and October 1741: 'Mr. Rubbilac Sculptor of Marble - besides several works in Marble - moddels in Clay. had Modelld from the Life several Busts or portraits extreamly like Mr. Pope. more like than any other Sculptor has done I think Mr. Hogarth very like. - Mr. Isaac Ware Architect Mr Handel-&c and several others. being very exact Imitations of Nature-'. [1] Both terra cotta and marble busts of Pope (q.v.) and Handel (q.v.) survive, but of Hogarth only a terra cotta (q.v.) is known. Vertue does not specify what he saw of Ware, but the wording strongly suggests a sitting. Roubiliac would first have taken a clay or clays ad vivum which was probably fired subsequently. A mould was in Roubiliac's sale, possibly indicating the production of a plaster cast, but no clay or terra cotta is now known. The NPG portrait is the only extant version. On stylistic grounds it is unlikely to have been made late in Roubiliac's career.
The situation is complicated by a reference found in Smith's Life of Nollekens, which could imply a date not earlier than 1755. The author refers to Ware's account of his own humble beginnings as the son of a chimney sweep which 'narrative my father heard the Architect himself relate, while he was sitting to Mr. Roubiliac for his bust'. [2] Later Smith again mentions the work: 'Early in life, I engraved a very indifferent plate of Ware's bust, which was one of Roubiliac's best performances'. [3] Unfortunately he gives no location for the bust which he engraved, and while the engraving is similar in some respects to NPG 4982, it is not absolutely certain that it is the same bust. There are some small differences. In the engraving the pupils are incised, there are two buttons on the neckband of the shirt, the cap and coat are shaded, and the shirt is left white. This led Mrs Esdaile to conclude that the engraving was of a coloured bust, like that of Colley Cibber (q.v.), now attributed to the Cheere workshop, but which she believed to be by Roubiliac. Noting that it was not until 1755 that Smith's father became Roubiliac's apprentice, Mrs Esdaile also concluded that Vertue's reference of 1741 must apply to some other bust now lost, [4] but both on stylistic grounds and on apparent age - the sitter looks a little younger than in the portrait by Soldi of c.1754 (see All Known Portraits) - there is nothing against a date of c.1741 for NPG 4982.
Smith's reference seems too circumstantial to be dismissed as a mistake. If correct, it must either predicate a full second sitting, or the touching up from the sitter of a marble based on an earlier model. It is a matter of opinion, but NPG 4982 may be thought to contain a smaller element of realism than persists in Roubiliac's marbles of Pope and Handel in relation to their terra cottas. This suggests that it may have been produced without direct reference to the sitter and may not be the bust mentioned by the elder Smith.

The head, the tip of the nose, and the fold in the coat on the sitter's right shoulder had been broken and skilfully repaired prior to acquisition; the socle is modern.

Bought 1974 with the help of the National Art Collections Fund; from the collection of Major Richard Wellesley, of Buckland House, Berkshire, Christie's, 4 December 1973, lot 159, bought Cyril Humphris, and according to the sale catalogue, previously in the collection of Lady Fitzgerald. A marble bust of Isaac Ware is mentioned in an 1861 [1] inventory of Buckland House and in 1912 under the heading 'Staircase and Hall'. Major Wellesley's grandmother, Lady Fitzgerald, wife of Sir Maurice Fitzgerald, 20th Knight of Kerry, acquired Buckland House and some furniture from the Throckmortons in 1908; [2] NPG 4982 may thus have descended in the Throckmorton family. An expensive object like a marble bust is not likely to have been commissioned by the sitter. The obvious patron is Chesterfield, or perhaps Byng. However there seems to be no record of NPG 4982 in such ownership, and a connection with the Throckmortons is not apparent.