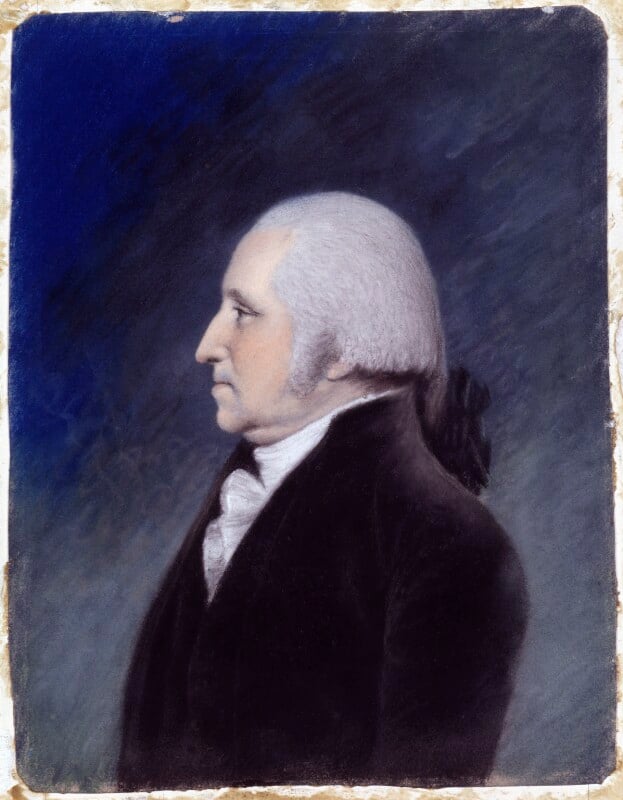 James Sharples arrived in New York in 1796 with his third wife Ellen, an amateur artist who became increasingly professional; they stayed in America until 1801. [1] His pastels, drawn with the aid of a pantograph in finely ground crayon applied with a camel’s hair brush on thick grey paper, [2] could be completed within two hours. [3] Charges were $20 for a full face and $15 for a profile. [4] It now seems impossible to distinguish between the hands of husband and wife; it was evidently James who first drew the portraits, but the four in the NPG seem more likely to be copies by Ellen (see Priestly NPG 175 and NPG 2904 and NPG 2903).
Washington's sittings, among the last he gave, are undocumented, [5] but Eliza Custis, Washington’s granddaughter, considered the Sharples profile ‘an admirable likeness, the profile taken by an instrument, and critically exact’; the example in the NPG Washington (76.17) bears a label written by her giving the date as 1797. [6] Copies by Ellen Sharples came to be highly regarded. In December 1804 she wrote that her copies of Washington and Priestly were then 'executed in a very superior style', [8] and she exhibited portraits of Washington and Priestly together at the RA 1807 (851); back in New York in 1809 she again described copying the Washington portrait, ‘drawn by Mr S on our first visit to America’. 6)
Twenty-six copies are illustrated by Knox; [7] examples are in the Wadsworth Athenaeum, the Metropolitan Museum of Art, New York, and in the Sharples collection in Bristol Art Gallery; 8) a single example showing the profile reversed (K. McC. Knox, The Sharples, 1930, no.27), belonging to Mrs DeButts in 1931, was then (perhaps questionably) considered the likely original. The type was engraved on five occasions in the late nineteenth century; the plate by H. B. Hall described as after the portrait painted from the life by Sharpless in 1796, that by P. Hall as from the Original portrait in the possession of the Evans family. Painted by Mrs E. Sharpless. [9]

William Taylor; his step-daughters, the Misses Eaton, of Liverpool and Leamington, by whom given to the sitter’s grand-daughter, Miss Catharine I. Finch of Birmingham, who gave it to James Yates1 1860; presented by him, with a portrait of Joseph Priestley [NPG 175], 1864.

1 As by Ellen Sharples, see Priestley NPG 175. This provenance is given in letters to Yates from Catharine Finch of 11 December 1860 and from Miss G. Eaton of 26 December 1860 (NPG archive).