3 of 22 portraits of George Washington 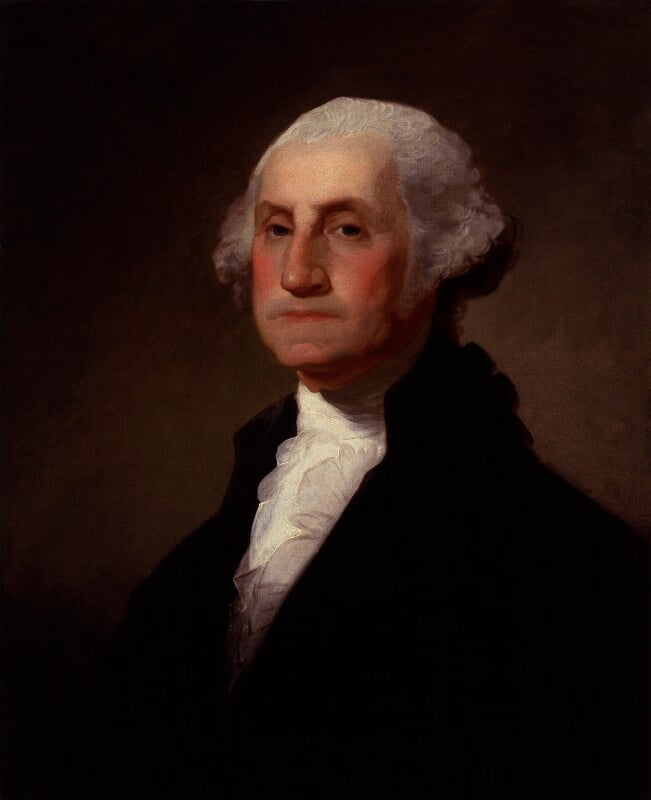 Stuart returned to America from London in 1793, resolved to make a fortune through ‘a plurality of portraits’ of Washington. Private inadequacies prevented him making a fortune, but his portraits of the President were acclaimed. ‘Mr Stewart is justly celebrated as the greatest painter of the age’, enthused the New York Time Piece, 5 February 1798, ‘and Washington is his hobby-horse’; twenty-five years later it was being said that ‘the only idea we now have of George Washington, is associated with Stuart’s Washington’. [1] It appears that he only received two sets of sittings in 1795 and 1796, but from these four patterns of Washington portrait derived:
the ‘Vaughan’ half-length portrait of 1795 (National Gallery Washington)
the ‘Athenaeum’ portrait of 1796, a fine head on an unfinished three-quarter length canvas (jointly owned by the Museum of Fine Arts, Boston, Mass., and the NPG Washington) - the ultimate portrait of Washington (canonised on postage stamps and dollar bills and which, for different reasons, Stuart termed his hundred-dollar bill)
the ‘Lansdowne’ or ‘Tea Pot’ portrait of 1796, the Athenaeum head on a whole-length standing figure, feet apart and right hand extended (NPG Washington), painted at the behest of Mrs William Bingham for the Marquess of Lansdowne
the ‘Munro-Lenox’ portrait of 1800, the Athenaeum head on a whole-length standing figure, heels together and his right hand resting on a table (New York Public Library)
the ‘Washington at Dorchester heights’ of 1806, the Athenaeum head on a whole-length standing figure, standing by a white horse (Museum of Fine Arts, Boston, Mass.).
NPG 2041 is an example of the Athenaeum pattern, of which some seventy half-length replicas have been recorded. [2] Three types have been distinguished within this pattern: type A with a short head; type B with smaller eyes and longer lips, and type C with a more pointed chin and darker eyes [3] -- of which NPG 2041 is an example. The provenance suggests an early 19th century date. General Pinckney, the first owner of NPG 2041, had previously commissioned a whole-length portrait of Washington for presentation to the French Directory on his appointment as American minister in Paris in 1796; he never received it and it is now in the White House. [4]

1 This provenance is given in letters from C. C. Pinckney of 2 September 1868 and 25 May 1869 (NPG archive). E. Bryant Johnston, Original Portraits of Washington, 1882, p 100, noted the claim that NPG 2041 had been presented by Washington to General Pinckney.
2 Harkness wrote from New York on 2 July 1924 saying that having seen a portrait of Washington in the NPG ‘attributed to Gilbert Stuart’ [NPG 774], he felt that the Gallery would prefer to have a portrait by Stuart himself (NPG archive).