4 of 22 portraits of George Washington 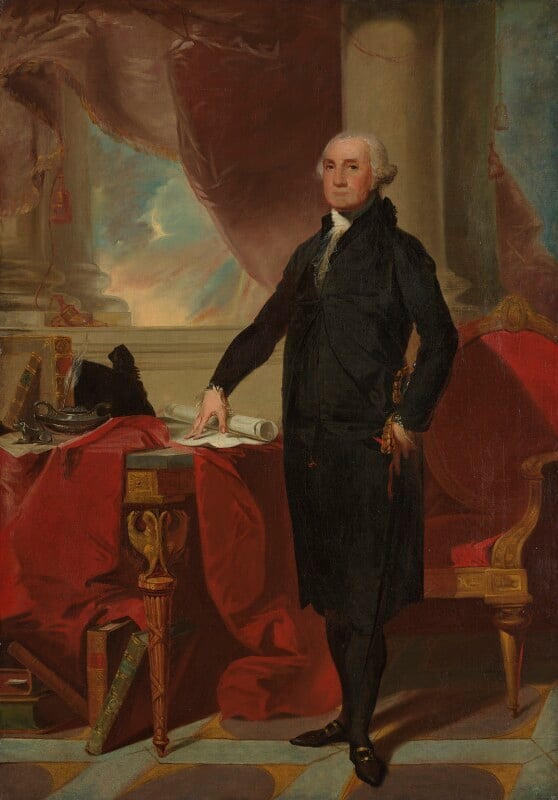 See NPG 2041.
A reduced, uninspired copy of the ‘Munro-Lenox’ portrait, NPG 774 was once attributed (without real evidence) to the copyist William Winstanley, [1] a British painter settled in New York who probably worked with Stuart in 1796-97 and who forged replicas of his portraits. [2]

Blue eyes, powdered hair, wearing a black suit with black buttons, his black hat on the red-covered table cloth; red upholstered chair, purple drapery in the centre; the books and papers are not lettered.1

1 In Stuart’s Lansdowne portrait the three books below the table are inscribed: GENERAL ORDERS, AMERICAN REVOLUTION and CONSTITUTION AND LAWS OF THE UNITED STATES; the two on the table: THE FEDERALIST and THE JOURNAL OF CONGRESS; see W. Kloss et al., Art in the White House, 1992, p 66.

William Scholefield (1809-67), Birmingham, who acquired the portrait through his American wife, née Miller; his son-in-law, George F. Meredith, 1877,1 from whom purchased 1887.

1 When Meredith first offered the picture to the NPG, providing the provenance here cited: Scholefield married in New York in 1828; it was alleged his wife’s forebear had served on Washington’s staff and had been given the portrait by Washington himself.

1 Meredith also claimed NPG 774 was shown at the Centennial Exhibition in 1876 [the Philadelphia International Exhibition], but that cat. lists, p 210, no.170, only the 'Lansdowne' whole-length Washington lent by J. Delaware Lewis.