17 of 102 portraits by Sir Francis Grant 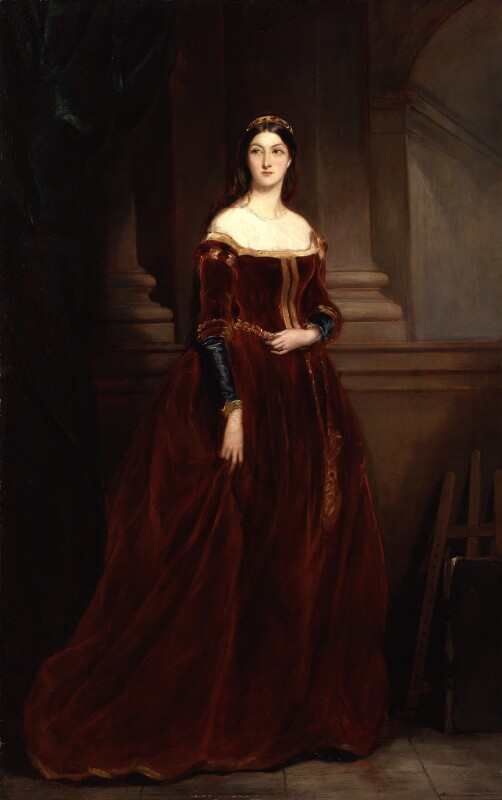 This is a portrait of an aristocratic young woman, with loose hair, dressed in a red velvet Tudor-style costume over a white chemisette, with gold embroidery at the low-cut neck, sleeves and hem, with two further bands on the bodice, puffed and slashed decoration on the sleeves at shoulder and elbow, kingfisher blue under-sleeves with gold decoration at the wrists, a gold chatelaine at the waist supporting a red velvet bag with gold decoration, wearing a red and gold braided fillet in her hair and gold rings on her wedding finger. She stands in a stone-built hall that evokes a historical or ancestral setting, as does her dress. In token of artistic avocations, however, the portraitist has included as accessories a portfolio and easel propped against the wall.

To all appearances, the undated painting is from the early 1840s, when Louisa Waterford was in her twenties (she married aged 24 in 1842). The historical dress could relate to the Court fashion for bals costumés promoted by Victoria and Albert; Louisa is depicted in eighteenth-century dress in an etching of the royal couple at such an event in June 1845 (NPG D16761). [1] In fact, both costume and Country Life 15 January 2014, p.60 allude to her attendance at the famous Eglinton Tournament in 1839, where she first met her husband (who took part in the jousting wearing imitation armour) [2] and where, according to her mother, Louisa’s ‘costumes were much admired, and looked simple and in good taste beside some of the more elaborately embroidered’. [3]

The gown is depicted in the sitter’s own watercolour sketch of her two Eglinton outfits. Sent to a friend and now in a private collection, this is inscribed ‘Your humble servant / morning / evening’, and the red gown is positioned above ‘morning’. [4]

However, the present portrait does not date from 1839–40, but from 1859–60. Its date and the careful depiction of the costume suggests the gown was kept and worn again by Lady Waterford, twenty years after the Tournament.

As the Hon. Louisa Stuart de Rothesay, she had first sat to Grant in April–May 1842 before her wedding on 8 June, for a larger full-length portrait wearing a white ballgown and stole in contemporary fashion, beside a giant column. [5] She returned for further sittings the following June, when her sister wrote, ‘She is sitting again to Grant, who wants her to alter the scarf and attitude of the arms in her picture, and Lou tries to make him paint her in white satin, but he won’t, I believe because he can’t!’ [6] This work, for which Grant charged 300 guineas, was exhibited in 1844 (see ‘All known portraits’) and installed at the Waterford house in Ireland, where it remains.

Comparison of the two works confirms the sitter’s identity. Although both are also somewhat conventionalized renderings of young womanhood, the accessories in the present work strongly indicate Louisa Waterford, known for her artistic talent. While one might expect more freedom of touch in the smaller work – for which Grant’s usual fee was 150 guineas – the composition and the treatment of the figure and face also support the attribution. Until recently, however, this was insecure, as the work is unsigned, does not feature in Grant’s well-kept sitter book, did not hang in any of the Waterford properties, and when acquired had a puzzling provenance. [7] Moreover, in a later letter comparing portraits of young women in white with conversation pieces, Louisa refers to ‘my own portrait by Grant’ in the singular, as if only one existed. [8]

Scottish-born Francis Grant rose to fame with hunting-scene portraits, produced in and for the social and equestrian circles frequented by Lord Waterford, whose main passion was hunting. [9] In 1840 Grant was commissioned to paint Queen Victoria on horseback and a career in broadly and flatteringly painted aristocratic and VIP portraiture followed. In 1866 he was elected PRA and knighted. Louisa Waterford knew of his work at an early date; in reference to the Eglinton Tournament, she wrote, ‘the sight was magnificent. I wish that Landseer or Grant, or some great horse-painter, could have seen it, for it would make the most beautiful picture possible – one of those long pictures in the style of the old Venetian masters. I can see it done in my mind’s eye, but do it I cannot, for horses I never could accomplish.’ [10]

The puzzle is resolved by the discovery that the portrait was commissioned from Grant by John Evelyn Denison, later Lord Ossington, around 1859. In an undated letter from this period, Grant wrote, ‘Dear Denison, I have broken ground on Lady Waterford’s picture – & hope about the middle of next week to be able to show it to you. I am very glad to hear what you say of from [sic] Lady Waterford – I daresay she will live & do great good in Northumberland for somebody the other day told me the property was in a very neglected condition.’ Within the letter is a compositional sketch, over the note ‘This is something like the arrangement’. [11] Showing the full-length figure standing in front of a raised column, right arm down, left arm bent at waist, the sketch confirms it was for the present work, in which the easel and portfolio replace a roughly indicated urn in the sketch. Reference to the recently widowed sitter’s future residence at Ford Castle, Northumberland, confirms the date (she moved there in September 1859).

Liberal MP and Speaker of the House of Commons 1857–72, Denison had sat to Grant himself in 1840 and would again in 1862; [12] more pertinently, he was ‘one of Lady Waterford’s most valued friends’ [13] together with his wife Charlotte, daughter of the 4th Duke of Portland, who was first cousin to Louisa’s brother-in-law Lord Canning. It is not clear who initiated the commission, and any suggestion that Denison had nurtured romantic feelings towards Louisa from the time of the Eglinton Tournament is scotched by the fact that he was married twelve years earlier; possibly the idea came from Lady Charlotte. Louisa’s correspondence records many visits to and from the Denisons; for example, in late summer 1860 she spent ‘a pleasant ten days in the Highlands, a quiet time with the Speaker and Lady Charlotte Denison’ [14] and on a subsequent occasion she records receiving them at Ford. [15] No reference is found however to the production of this portrait. It could have been produced from earlier studies and the actual red velvet gown, without renewed sittings, which would account for Louisa’s still-youthful appearance (at the end of 1859 she was aged 41). The setting, in this case, might be Grant’s invocation of her new home of Ford Castle, which she described as having ‘much of its old romantic form … in the old towers of hoary stone, overlooking the field of Flodden, you can imagine something of the time of Marmion … the walls are eight or ten feet thick’. [16]

As Louisa Waterford’s biographer recalled, ‘[t]his portrait, a full-length in a square-cut red velvet dress, belonged to Lord Ossington, and long hung in the drawing-room of the Speaker’s House at Westminster’. [17] After Ossington's death in 1873, it presumably passed to his widow, in whose home Louisa could have seen it. Thereafter the provenance is obscure [18] and the portrait vanished from view until sold by the wife of Sir Ronald Storrs. [19]

The reference to 46 Upper Brook Street on an old label is as yet undeciphered. In 1860 the house was occupied by a turnery and toy warehouse. Denison’s London residence was 7 Carlton House Terrace.