9 of 31 portraits matching these criteria: 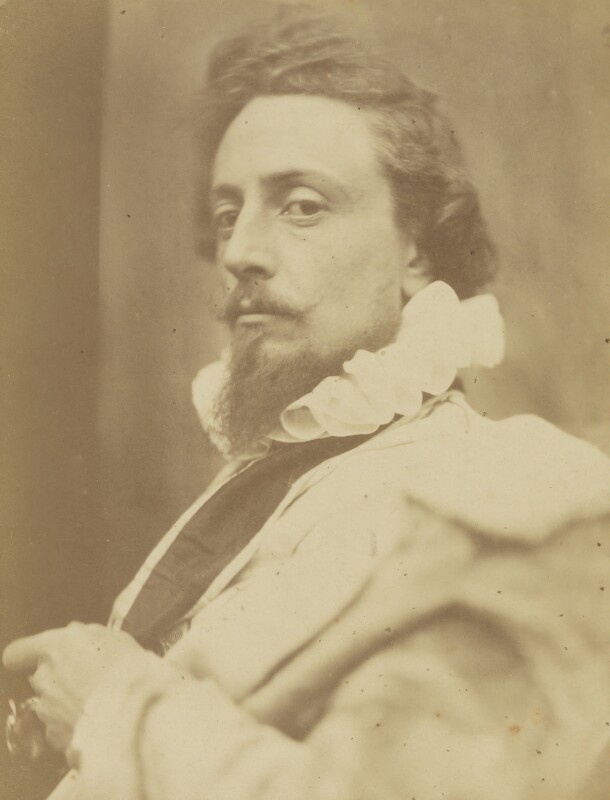 This photograph was issued in Part 1 of The Studio: A Collection of Photographic Portraits of Living Artists, taken in the style of the Old Masters, by an Amateur, with portraits of John Phillip, Thomas Faed and P.H. Calderon, as part of the ‘Flemish and Dutch Schools’. Available for sale from March 1864 it was not, however, among those images registered for copyright by David Wilkie Wynfield in December 1863, and may therefore date from the early weeks of 1864. Like the other portraits, it is presumed to have been created in Wynfield’s studio. It is one of three recorded poses of Watson by Wynfield (see ‘All known portraits, Photographs, c.1863–4’).

The period reference is clearly to Van Dyck’s male portraiture, in respect of costume, pose and general aspect. According to Henry Stacy Marks, ‘In his later days, when his hair, moustache, and pointed beard were of a uniform grey, [Watson] looked as if he had stepped out of the frame of one of Vandyke’s portraits.’ [1] Juliet Hacking further notes that in the present photograph his ‘whiskers were evidently primped in order to bring out this likeness between Watson and his historical predecessor’. [2]

Watson had connections with the St John’s Wood Clique as a friend and fellow student of Stacy Marks at the Royal Academy Schools. He was brother-in-law to (Myles) Birket Foster and appears in costume in photographs taken at Foster’s home; like that worn by Foster, his costume for the weekend garden party shown in the family album is similar to the dress he wears for Wynfield. As Juliet Hacking notes, this provides evidence that sitters had some hand in suggesting and providing costumes for Wynfield’s photographs. [3] Incidentally, towards the end of Watson’s career, he sent to the RA (1883 [525]) a ‘Portrait in the costume of the seventeenth century’.

Another pose in the same costume (NPG x20698), apparently taken at the same sitting, shows minimal variation in pose, lighting and exposure (see ‘All known portraits, Photographs, c.1863–4’); printed at a similar size but with less clarity it offers an over-bleached image but indicates that Watson’s right hand is holding a medallion hung on a wide ribbon.

In the third image, Watson wears a dark cape, a falling rather than a ruff collar, and a ring on his left hand, which is stretched over his now invisible right arm as his torso is turned towards the camera.