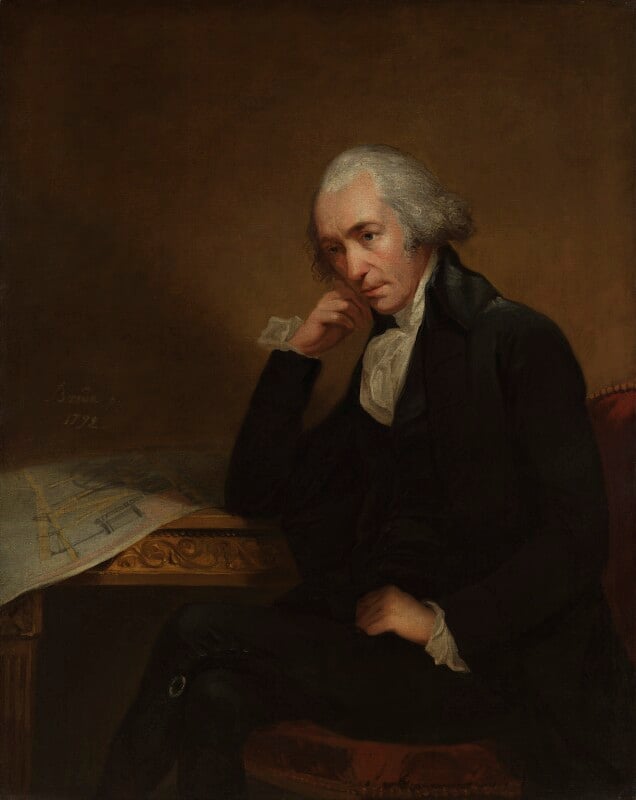 NPG 186a is an autograph replica of the earliest known portrait of Watt. On 7 June 1792 the engineer John Rennie had asked Matthew Boulton and his partner James Watt to sit for their portraits to Mr [Mather] Brown of Cavendish Square in London; Watt replied from Birmingham (9 June) ‘I wish you to come this way ... and we can talk about the portrait to which I am rather averse as I think it an honour I do not merit and that my countenance cannot be worth procuring’. [1] In the event Breda painted them both that year in Birmingham (where he also painted William Withering), and mezzotints of his two portraits by S. W. Reynolds were published in December 1796. Mrs Schimmelpenninck recorded that Watt had instructed ‘a celebrated Swedish artist’, presumably Breda, that rat’s whiskers made ‘the most pliant and elastic painting-brush’. [2] The portrait of Watt is not without fault, the sitter’s raised right arm being unfortunate.
The portrait commissioned by Rennie is now in the Institution of Mechanical Engineers, London, [3] and another signed and dated version is in the Science Museum, London. [4] Later copies were made by a Miss Binnie (Institution of Civil Engineers, London) and by W. Bright Morris 1905, formerly in Andrew Carnegie’s collection, and now belonging to the Heriot-Watt University, Edinburgh.

Blue-grey eyes, greying hair, wearing a black coat and seated in a red chair; on the table lies a drawing of a double-acting rotative steam engine, resembling the Watt patent specification of 1769.