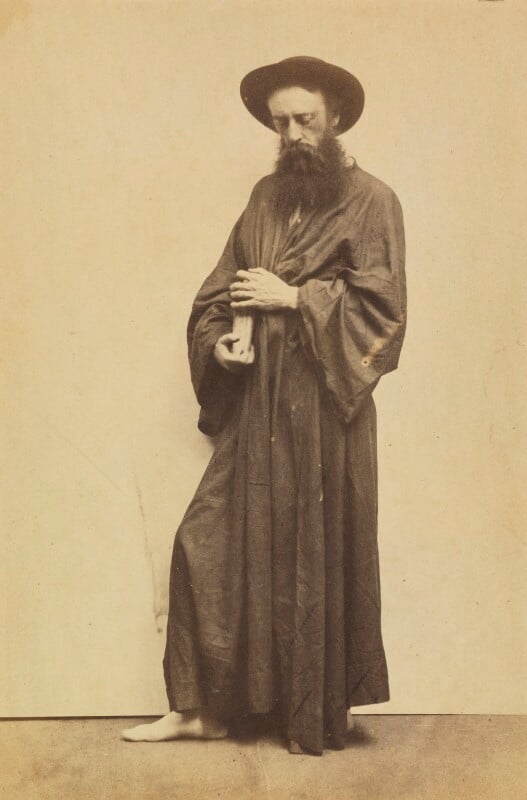 This is an early photograph of Watts by a relatively obscure photographer. [1] The date 1858 is inscribed on the back of the print, but there is uncertainty over this. Another print held at the Watts Gallery, Compton, is inscribed ‘Study for Lincoln’s Inn. about 1854 by Soame at old Little Holland House’, while the earliest publication of the image (Barrington 1905) describes it as ‘Taken in his Studio 1854, given to the author in 1883’. [2]

James Soame sen. photographed Watts in four poses: in light and dark tunics, wearing a hat and holding a folio. It is possible that a photo of him wearing a chainmail shirt is also by Soame (see ‘All known portraits, Photographs, 1854–8’). The photographs are thought to show the artist posing for figures in his fresco entitled Justice: A Hemicycle at Lincoln’s Inn, on which Watts worked from 1852 to 1859. Although no similar figure appears in the final design, the proximity of Soame’s business in St Martin’s Lane to Lincoln’s Inn lends plausibility to the suggestion. In the late 1850s Watts produced several works painted on panels supplied by Soame (see Choosing, NPG 5048 and NPG 5087) and more information may yet come to light on the relationship between artist and photographer.

The robe and full-length single figure composition seen in Soame’s sequence also resemble Watts’s ‘Venetian Senator’ self-portrait (see ‘All known portraits, c.1853’), while Watts can be seen in the same style of hat in his 1864 self-portrait (Tate).

1) James Soame sen. (1835–1905), born in Westminster, was a photographer recorded in London and Oxford, where he worked as a photographic printer with his son James Soame jun. and was one of the founders of the Oxford studio of Gillman & Soame. He died in Walsingham, Norfolk.
2) Barrington 1905, facing p.32.