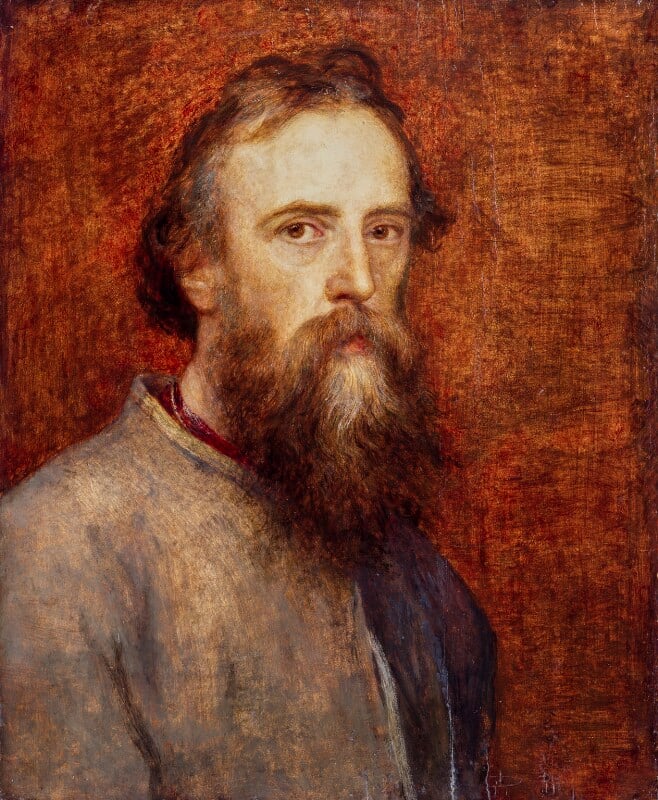 Upper and lower edges of panel stamped with name of supplier: ‘J. SOAME’.

This is one of many self-portraits by Watts, who wrote, ‘I paint myself constantly, that is to say whenever I want to make an experiment in method or colour and I am not in the humour to make a design.’ [1] His self-portraits have been described as ‘a series of revealing self-images replete with associations of the past’. [2] This, however, is an undocumented work, not mentioned by his widow Mary Seton Watts and evidently unknown to her. [3] It is nonetheless clearly authentic and can be dated to the early 1860s on stylistic and iconographic grounds; the use of panel and thin transparent glazes are typical of Watts’s work at this period. The many long and short lines of scoring and hatching in different directions, below the paint surface and sometimes across passages, are puzzling.

By comparison with other self-portraits – the knightly self-images in the ‘Ilchester’ self-portrait and The Eve of Peace (see ‘All known portraits, c.1844-5’ and ‘1863’), with the ‘Venetian Senator’ self-portrait (see ‘All known portraits, c.1853’), with the ‘Bowman’ painting (see ‘All known portraits, 1862–4’) and with NPG 1406 – the present work offers a less rhetorically dramatized view of the artist, yet one suggestive of the ascetic, cloistered image he chose to promote. As in his portraiture generally, the subject’s social status and profession are suppressed in favour of a representation of individual intelligence. The subdued tones, pose and somewhat watchful gaze are reminiscent of Titian’s portrait of Tomaso or Vincenzo Mosti in Palazzo Pitti, which Watts would have seen in Florence.

The work is painted on panel, stamped with the name of the supplier, J[ames] Soame, who also created the photographic portraits of Watts in historical costume associated with his Justice fresco sequence for Lincoln’s Inn (1853–9; see NPG P68 and ‘All known portraits, Photographs, 1854–8’). Similar supports were used several times by Watts in the period 1857–64, including the ‘Moonlight’ portrait of Tennyson [4] and Choosing, the portrait of Watts’s first wife Ellen Terry (NPG 5048). Oral tradition claims that the present work was given to Terry at the time of her marriage to Watts in 1864, which could account for its subsequent disappearance, but no evidence has come to light and neither the format nor handling suggests any relationship with Choosing. When acquired (without a frame) by the National Portrait Gallery, the panel had developed a considerable convex curvature, [5] with a serious split at the foot and smaller splits elsewhere; it was subsequently rebacked with a wood and canvas support, but the curvature persists.