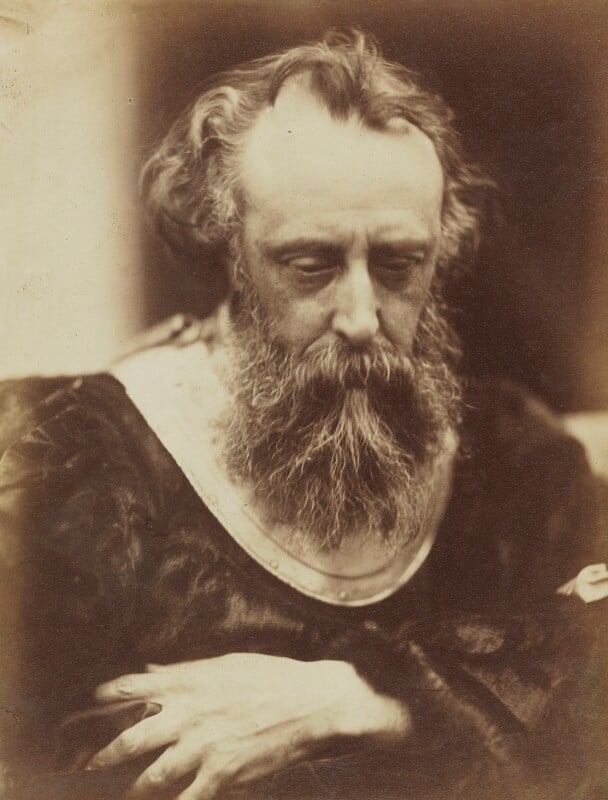 This image was created for Wynfield’s series of artists portrayed in historical and contemporary costume, many of which were released for sale from March 1864 and entitled The Studio: A Collection of Photographic Portraits of Living Artists, taken in the style of the Old Masters, by an Amateur. This image is thought to be that registered for copyright by Wynfield on 8 December 1863, as ‘Photograph of G.F.Watts in Venetian costume, bust, full face.’ [1] It was possibly created in Watts’s studio at Little Holland House. The same metal collar-plate, presumably from an artist’s costume-box, is seen in Wynfield’s portrait of Richard Ansdell (NPG P70). The pose, with eyes downcast, is reminiscent of Watts’s pose and expression in The Eve of Peace (see ‘All known portraits, Self-portraits, 1863’), where he depicted himself as a medieval knight after battle. The ‘Venetian’ allusion, however, presumably relates to Watts’s ‘Venetian Senator’ self-portrait (see ‘All known portraits, c.1853’).

NPG P86 is one of two identical prints held by the National Portrait Gallery; see also NPG P96. Another print is in The Metropolitan Museum of Art, New York (1977.537).

There are two known images of Watts in historical costume by Wynfield. In the other, held by the Royal Academy of Arts, London, he is shown in a pale embroidered or brocade smock, turning to the right, with more compositional emphasis on the hands (see ‘All known portraits, Photographs, c.1863’); for a painter it is the more evocative pose.