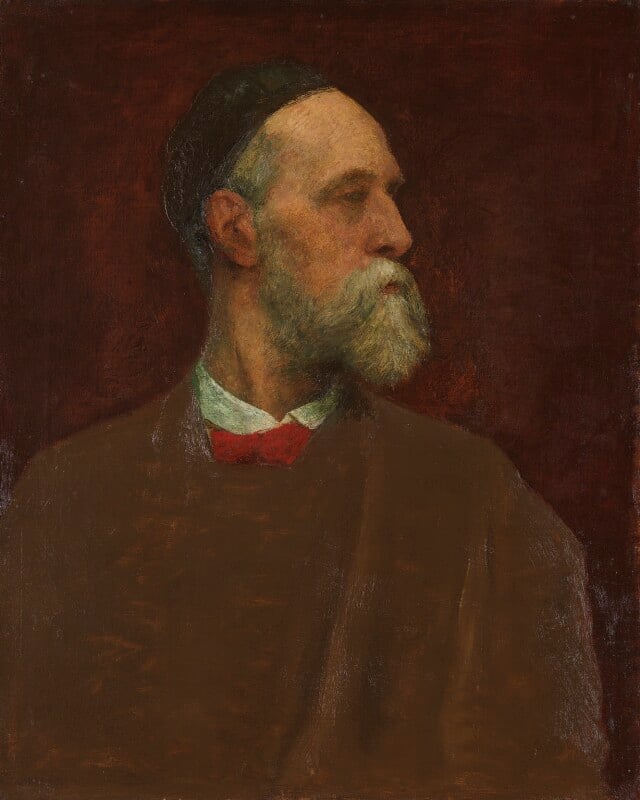 This is a version – less finished and smaller, but closely related in pose and treatment – of the self-portrait in the Uffizi Gallery (see ‘All known portraits, 1879–80’), requested from the artist by the authorities there for the famous series of artists’ self-portraits. [1] The practice among British artists of submitting a self-portrait to the Uffizi had lapsed during the mid-nineteenth century, and was revived at the request of the Uffizi director through Frederic Leighton. Apart from himself, Leighton recommended that initially Watts and Millais should be approached, and all three artists contributed self-portraits in 1880. [2] A decade earlier, Watts had remarked that ‘the most interesting gallery I know is the collection of Artists’ Portraits painted by their own hands [in the Uffizi]’. [3] The current portrait and another of the same date now at the Watts Gallery, Compton (see ‘All known portraits, 1879’) were evidently painted alongside the Uffizi portrait; Watts often worked on several versions of a picture at the same time, finally selecting the one to be finished and exhibited. The Uffizi version shows Watts holding a palette and standing before his own work-in-progress, Time, Death and Judgement (1868–84). [4] To depict his own profile, the artist used two mirrors.

The present work has a mulberry-coloured background, and the sitter’s brown smock appears to have been loosely painted in at a later stage. The paint is thickest around the head and cap, with some scratching out on the hair and beard and a stipple-like effect on the face that leaves the eye ill-defined. A touch of colour is provided by the red cravat and white collar.

Both this and the Uffizi version are consciously Titianesque in mood and composition, evoking a sense of timelessness and monumentality. [5] Watts greatly admired Titian’s use of colour (he also once had a dream of being instructed by him) and here he aspired to emulate Titian’s technique. [6] A close comparison is provided by the late Titian self-portrait in the Prado: Watts portrays himself in similar pose but opposite profile, and clad in a similar dark coat, white collar and skullcap; as contemporaries noted, ‘Watts’ resemblance to Titian is more marked than ever’, [7] and the motif was repeated in Watts’s last self-portrait (see ‘All known portraits, Self-portraits, 1904’ and NPG P168).

The present work is painted on a prepared Winsor & Newton canvas, and has a standard Watts-style frame.

The artist, by whom bequeathed and by whose executors presented 1905.