1 of 5 portraits by George Andrews 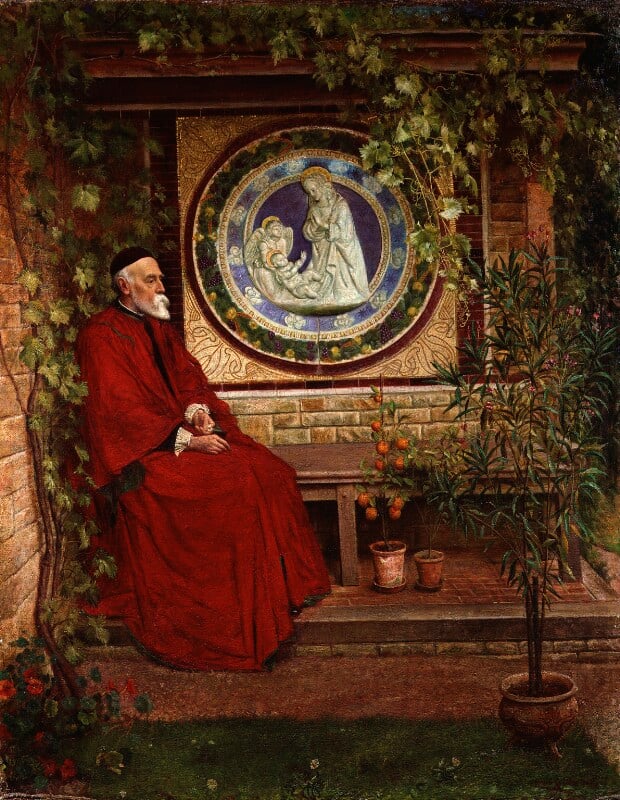 This portrait of Watts in his early 80s was done at his home, Limnerslease in Compton, Surrey, where the artist lived from 1896 to 1899. It shows Watts sitting in a garden alcove decorated with a Della Robbia majolica tondo depicting the Virgin and Christ Child. He wears the red gown of the Oxford University honorary doctoral degree awarded to him in June 1882, but which also echoes that in his ‘Venetian Senator’ self-portrait (see ‘All known portraits, c.1853’). He holds a small book in his right hand and a daisy in his left hand. Both pose and accessories allude to the Italian Renaissance arts that Watts held dear.

The sitter’s head and hands are thought to have been painted from life, and the setting depicts the actual garden alcove, but both pose and setting are copied from those in a photograph set up by Watts, taken by George Andrews in 1895 (see NPG x19021 and ‘All known portraits, Photographs, 1895’) and widely published. To this composition the artist added olive and orange trees in pots, and a more luxuriant vine growing amid nasturtiums from lower left, up, across and down towards the right.

Although Watts’s head and hands are clear foci of visual interest, the Della Robbia tondo engrosses most of the pictorial attention while the accessories are painted with equal but disproportionate precision. The brushwork endows the surface with overall stippling, perhaps in order to pull the compositional elements together.

The first known reference to the present portrait is from a Scottish newspaper, stating that ‘Mr Louis Deuchars … is engaged upon a painting from life, of his friend and patron, Mr G.F.Watts, the eminent Royal Academician. The painting will probably be exhibited in one of the London Galleries next season.’ [1] It was duly shown at the New Gallery in 1899, where Watts himself exhibited.

Painter and sculptor Louis Reid Deuchars was born in Perthshire and trained at Glasgow School of Art. In 1891 he sent Watts samples of his work, and at the end of 1895 he was engaged as assistant to Mary Seton Watts in the Compton Pottery and the Compton Mortuary Chapel which she created; [2] he also worked as Watts’s assistant on Physical Energy and a memorial statue of Tennyson. [3] In 1899, from Limnerslease, he sent NPG 5223 for exhibition at the New Gallery, London, and the following year for exhibition in Glasgow. Soon afterwards he became an instructor at the Aldourie Pottery in Dores, Inverness-shire, set up by Mary Watts. For Deuchars’ second portrait and statuette of Watts, see ‘All known portraits, By other artists, 1904’ and ‘c.1904’.