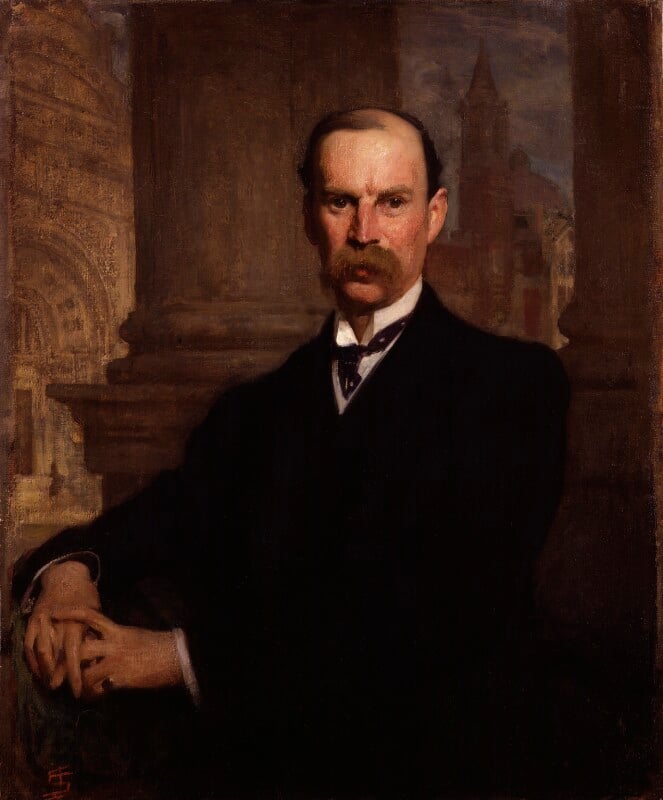 Solomon Joseph Solomon made two portraits of Sir Aston Webb. One, showing him seated three-quarter-length in an interior, was exhibited at the Royal Academy in 1906 (260) and is in the collection of the Royal Institute of British Architects, where Webb served as president from 1902 to 1904. The second, NPG 2489, is a half-length set against architectural scenes, and was in Webb’s collection at his death in 1930. The set of the head and shoulders is closely similar though the clothes differ. The canvases are signed with Solomon’s monogram but neither is dated. They show the architect at the height of his career.

The architectural vistas in NPG 2489 show, to the left of the main column, the front entrance of the Victoria and Albert Museum, London, and on its right a perspective of Birmingham University with the Chamberlain clocktower. [1] These were the two great architectural schemes Webb was engaged on at the time. (His entries for the RA Summer Exhibition in 1907 were designs for these projects.) [2] NPG 2489 may have been painted for the family later than 1906, following the success of the RIBA portrait, as the background of the second portrait displays references to current projects. Webb’s son Maurice thought ‘Solomon had painted both from sittings and that the portrait now offered to the N.P.G. was a replica only in the best sense’. [3] Solomon showed a portrait of Lady Webb at the RA in 1908 (373).

Solomon was elected RA in 1906, and ‘the epoch which followed this electionship contained a series of brilliant years [...] at the age of forty-six Solomon had blended the many forces of his character into a whole and had obeyed the precepts which make for a full and happy life’. [4]

The portrait was offered to the Gallery by Maurice Webb FRIBA and his sister Dorothy, the sitter’s surviving children, in February 1931. [5] Because it was soon after the sitter’s death the Trustees were faced with the usual dilemma; they concluded that in this case ‘they did not feel that they would be justified in suspending the ten years’ rule’. Maurice Webb accepted this, ‘but his difficulty was that he only had a very small house and already had in his possession a portrait of his father’. [6] In the end the painting was accepted on condition it was not displayed for ten years. [7]

1) In 1905 Joseph Chamberlain announced a large gift to Birmingham University Council, to be spent on a clocktower for the new campus. Modelled on the Torre del Mangia, Siena, for a long time it remained one of the tallest buildings in Britain.
2) ‘Principal entrance, University of Birmingham’ (1619); ‘Elevation towards University Road, University of Birmingham’ (1626); and ‘Victoria and Albert Museum: detail of central entrance to Cromwell Road’ (1627).
3) H. Hake memorandum, 13 Dec. 1930, NPG RP 2489.
4) Phillips [1933], p.98.
5) They also presented an important portrait of Elizabeth I formerly belonging to Aston Webb, now NPG 2471.
6) H. Hake memorandum, 13 Dec. 1930, NPG RP 2489.
7) Maurice Webb added a proviso: ‘If during the ten years when my Father’s portrait is not being exhibited in the National Gallery [sic], other local galleries would care to borrow it, I should have no objection to their doing so, but I should prefer that it be loaned either to a gallery in Birmingham (as my father designed the new University Buildings in this City) or to one or two in Worcester.’ Letter from M. Webb to H. Hake, 16 Dec. 1930, NPG RP 2489.

Half-length, full-face, seated, hands clasped on green cloth on armrest at left, posed against two columns, between which are views of the main entrance to the V&A Museum and Birmingham University.

Given by the sitter’s son and daughter, Maurice E. Webb and Dorothy Webb, 1931.