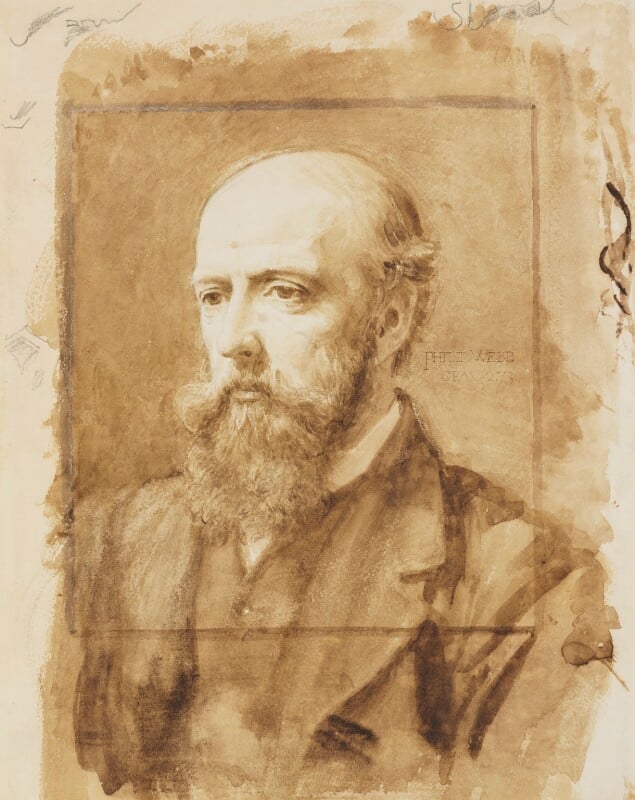 This is the second and apparently later of two drawings of Webb by the same artist. On receipt of the portrait on 18 March 1873, the sitter wrote:

Dear Murray, You brought me last evening the most graceful, as well as the most delightful present you could have made me – namely the portrait of my life’s friend. In sending you 10£ I only wish to recognise the value of your gift in a way that cannot intend that such a gift should even appear to be repaid, only that my present shall cost me some thing; to show my gladness. The mere money will defray (perhaps) the cost of the antiquarian print but cannot in anyway represent the value of the gift.
Yours in the flesh you have kindly laboured to represent.
Philip Webb. [1]

The two men met around 1866 and friendship followed, through involvement in work for the partnership that later became Morris & Co.. [2] In 1873, Webb was engaged in architectural work for Naworth Castle, Cumbria, together with his regular participation in the affairs of the Morris firm, where Murray worked intermittently as assistant to William Morris, between visits to Italy to make drawings for Ruskin. [3]

The internal ‘frame’ within the drawing appears to indicate the artist’s proposed mounting, and this is how it is normally reproduced. Stylistically, the drawing may be compared with NPG 3652, Murray’s portrait of Morris, usually ascribed to around 1870.

Artist and art dealer, Charles Fairfax Murray worked for Morris and the company, as well as for Edward Burne-Jones, Rossetti and Ruskin during the late 1860s and 1870s. From the 1890s he acted as consultant to several directors of the Fitzwilliam Museum, Cambridge, including Sir Sydney Cockerell, former owner of this work, who from 1890 was a colleague of Morris and Webb on the committee of the Society for the Protection of Ancient Buildings.

Head-and-shoulders, looking left and down.

The sitter; Sir Sydney Cockerell, by whose heirs presented 1963.