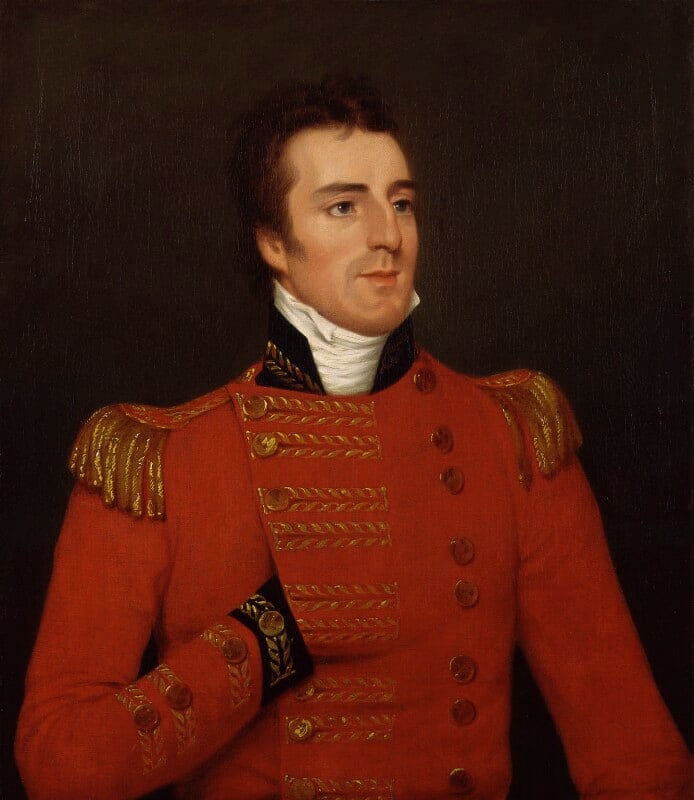 Robert Home's Register of Sitters in India 1795-1813 (MS in NPG library) lists 14 portraits of General Wellesley begun between September 1804 and August 1806: three whole-length at 2000 Rupees, one half-length at 1000 Rupees, one small whole-length at 500 Rs, and ten heads at 500 Rs. The prices represent sicca Rupees which were of high quality. Presumably the single half-length under September 1804 is NPG 1471. This shows the future Duke, his hand thrust into his jacket, in major-general's uniform (he was promoted in 1802) and without the Star of the Order of the Bath which he was awarded in August 1804 but which did not arrive from England until Sir John Cradock pinned it on his coat while he was asleep in Madras shortly before sailing home in March 1805 (Elizabeth Longford, Wellington, I, p 97). Later versions show him with the Ribbon and Star (or Star only) of KB (Wellesley and Steegman, Iconography of the 1st Duke of Wellington, 1935, pp 20-2). Whole-lengths are in Rashtrapati Bhavan, New Delhi, seen in Home's studio in December 1804 (Memoirs of William Hickey, IV, pp 304-5 in the Royal Collection (St James's Palace), painted for the Maharajah of Mysore (Sir Oliver Millar, The Later Georgian Pictures in the Collection of her Majesty The Queen, 1969, 831), and a third painted for the East India Company, perhaps that now in Wellington's old office in the Horse Guards, Whitehall. The small whole-length was painted for Admiral Page (then captain of the ship taking General Wellesley home in 1805) and now GAC 15068. Three-quarter-lengths are at Apsley House with the Star of KB but without the Ribbon, and in the Ministry of Defence (a 1902 copy ex India Office, see William Foster, India Office Catalogue, 1924, no.41). Half-length versions of the same size as NPG 1471 are at Stratfield Saye and Christie's 8 March 1957 (109).

Mrs Elizabeth Bruce Gordon and bequeathed by her in 1885 to Sir Brooke Kay, Bart for his life, then to the National Gallery 1907; transferred to the NPG 1907.