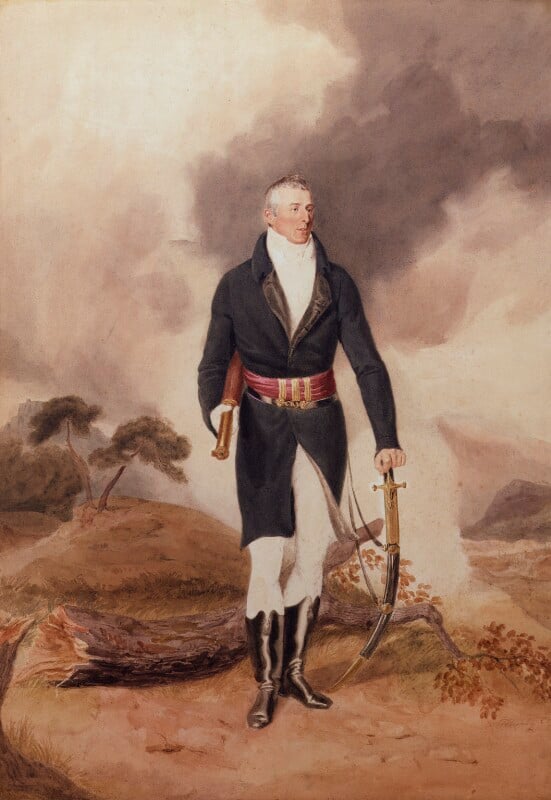 Heaphy's watercolour head (NPG 1914(18)) was used as a preliminary study for the large picture, location unknown, engraved by Anker Smith 1822 as 'Field Marshall the Duke of Wellington giving Orders to his Staff before a General Engagement'. The NPG watercolour is not dated but an account by a volunteer dated 18 September 1813 shortly after the capture of San Sebastian fixes Heaphy's presence among the army: 'a painter is at headquarters sketching a group for publication in which is a most excellent likeness of Lord Wellington' (Michael Glover, A Gentleman Volunteer: Letters of George Henwell from the Peninsula War, 1979, p 131). The drawing was worked into a miniature now at Stratfield Saye, head and shoulders in uniform, wearing the Ribbon and Star of KB, signed and dated 1813. It was described by Wellington to Lord Burghersh from St Jean-de-Luz 12 January 1814: 'I have sat to Mr Heaphy for a picture for her (Lady Burghersh) which I suppose will be sent to her, unless one of her sisters or her mother should seize it' (Wellesley and Steegman, Iconography of the 1st Duke of Wellington, 1935, pp 19-20). Heaphy later developed it into a series of watercolour whole-lengths of which NPG 4176 is one; another is in the Lindsay of Colstoun collection, East Lothian, and another was shown to the NPG from a private collection in Bolton, both signed and dated 1816; another is at Goodwood inscribed: Given by Arthur, Duke of Wellington, to Charlotte, Duchess of Richmond, after the Battle of Waterloo. Painted by Heaphy. A copy, signed and dated: P J de Vlamynck 1815, was at Sotheby's (Wellesley sale) 29 June 1920 (217), reproduced Connoisseur, LIII, 1919, p 137. A variant is at Stratfield Saye with the captured imperial colours to the left, and others are known. The final picture shows Wellington mounted on a grey charger, for which there are watercolour drawings in the National Army Museum and at Bowhill. The Rochard miniature of 1815 appears to owe a good deal to Thomas Heaphy.

Whole-length standing by a shattered tree-trunk, in long black coat with high collar and unbuttoned to the waist where it is secured by a purple waistband with vertical stripes of gold braid, white trousers, black top-boots, left hand on sword, right holding telescope; close-cut light brown hair wavy on top, light blue eyes, healthy complexion; stormy sky background with trees and a hill-fort to left, mountains to right.

Probably Heaphy sale, Foster's 4-5 May 1836 (211); Lord Combermere; acquired and given by deed of gift by Edward Peter Jones 1945 and received by the Gallery after his death 1960 (see also Combermere).