8 of 640 portraits of Arthur Wellesley, 1st Duke of Wellington 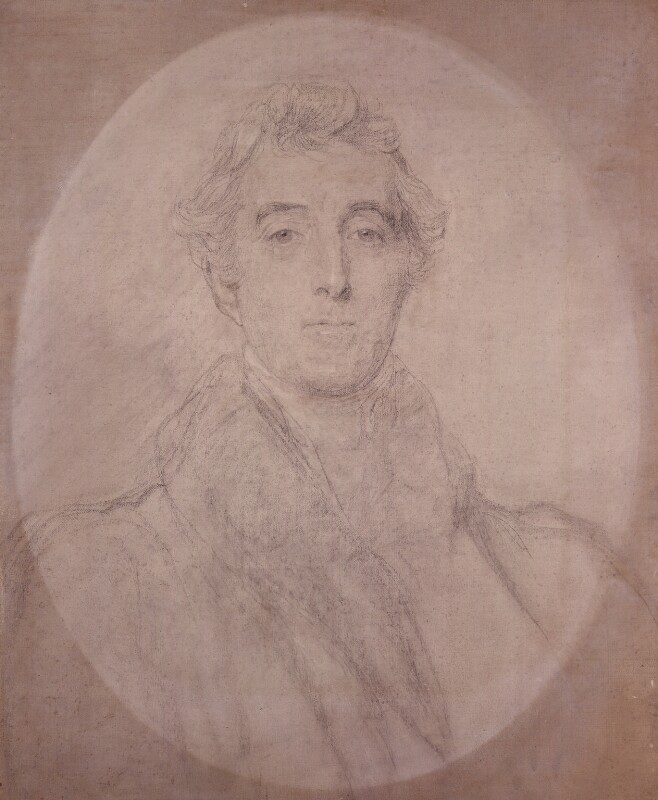 Inscribed on a label on the back, probably by Sir Henry Russell: This is the original drawing which Sir T./Lawrence made of the Duke of Wellington,/and from which he afterwards painted/all of his pictures of him. It must have been/made about 1816. I first saw it in the possession of Graves the printseller of Pall/Mall, about 1841, and I bought it from/him, after the publication of the Engraving/from it, in August 18. A time will/come when the drawing of such a man/by such a hand will be of great value./I attach a great value to it now.

According to the inscription written presumably by Sir Henry Russell on his acquisition of the portrait in 1842, the drawing is Lawrence's original study for the subsequent oils, in which case it could be as early as 1814 when Farington noted Wellington's first visit to Lawrence's studio (Diary of Joseph Farington, 6 July 1814 and Sir Oliver Millar, The Later Georgian Pictures in the Collection of Her Majesty The Queen, 1969, 917). This may be true and it may be the drawing which Lawrence kept in his studio as a modello until the sale of his effects in 1831 when lot 122 was described as 'The Duke of Wellington, in black and white chalk, half length - very fine'. This was bought by a bidder named Tate and later acquired by Hodgson & Graves, the publishers of Lewis's stipple engraving of 1840.
However Sir Henry Russell would have been naturally optimistic about his drawing and it was not Lawrence's usual practice to begin a sitting with this type of sketch. It has more the air of being a pencil copy made later from one of the oils and kept in the studio possibly as a reminder or for a present or even made expressly for Lewis's engraving published eventually long after Lawrence's death. The head is similar to that in the Apsley House oil of c.1815-16 but the high collar resembles its later variant painted for Charles Arbuthnot MP, exhibited RA 1822 and multiplied in numerous studio copies (Wellesley and Steegman, Iconography of the 1st Duke of Wellington, 1935, p 28 and plate 25).
A touched up version of the drawing, believed to have come from Samuel Woodburn's sale of Lawrence drawings, Christie's 4-8 June 1860, was at Sotheby's 16 January 1975 (49).
According to an inscription on the back of the frame, probably by Sir Henry Russell, the ducal coronet surmounting the frame was carved from an elm tree from the battlefield of Waterloo.

Head and shoulders facing in a cape with high collar, thick wavy hair.

Perhaps the artist and his sale 18 June 1831 (69 or 122) bought Tate; perhaps Lodges Portraits sold Christie's 3 May 1838 (243) - 'Large chalk drawing from which he commenced his portraits' bought Moseley £61.19.0; Messrs Graves (printseller) and bought from there by Sir Henry Russell 1842; Sir Arthur Russell of Swallowfield Park; Marjorie Lady Russell (his widow) and her sale Christie's 21 March 1969 (77) bought Colnaghi for the NPG.

Stipples by F. C. Lewis published Hodgson & Graves June 1840, one in an oval, one rectangular, both in imitation of drawings.