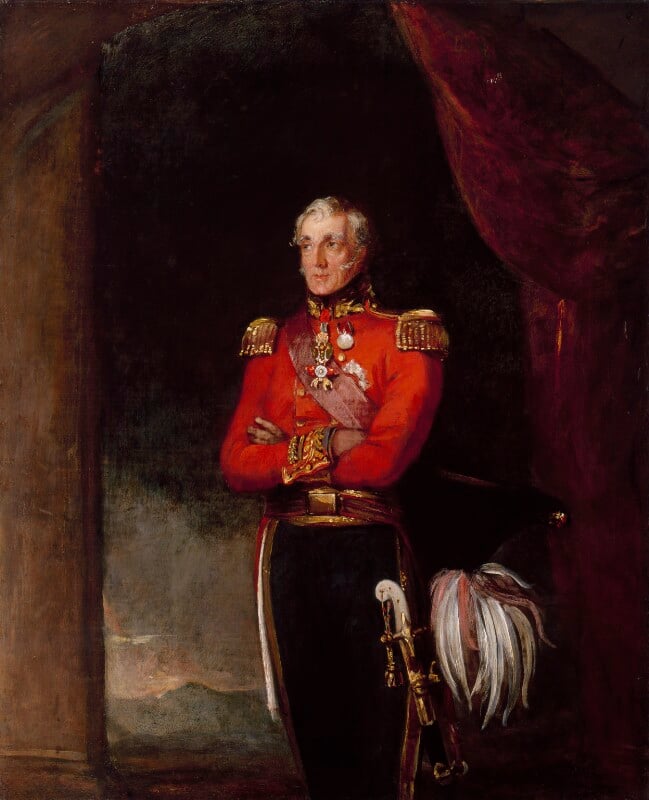 The NPG oil sketch, painted on a slightly larger canvas than the others, is one of a collection of studies made by Salter for his large picture, 'The Waterloo Banquet at Apsley House 1836', now at Stratfield Saye House. The Duke gave sittings to Salter (among other artists) at Walmer Castle in 1839 but when Lord Sandys, on behalf of Salter (or possibly John Lucas), asked for a few hours' sitting at Stratfield Saye to complete the job, he was answered by a diatribe from the Duke whose aversion to artists was well known:

S.S. Dec 6 1839/My dear Lord Sandys/I am convinced that there is no Man existing or that ever lived in this Country who has sacrificed his time, his leisure, his amusements, the best hours of his days, to the Artists to the same degree that I have. I have sat for no less than six Pictures since the Prorogation of Part. My House at W.C. [Walmer Castle] was full of Artists. I have had three there at a time, each taking up one, two, three hours of the best of the day & I am now called upon to receive another here in the Winter, and to devote to him possibly the only Hour of Daylight that there may be in the 24 hours. Is this fair? Why should not these gentlemen do as their predecessors have? Why not copy from each other? I answer, their confounded vanity prevents it. I must sacrifice my time in order to satisfy their vanity! that each may say - This is an original Picture of the D of Wellington. I attended him at S. Saye to paint it. A l'impossible personne n'est tenue. I cannot do what is required of me Yrs Wn
(MS letter at Stratfield Saye House, kindly shown to me by the archivist, Mrs Joan Wilson).
Larger variants of NPG 3766, whole-length standing under an arch with plumed hat in his right hand, are at Stratfield Saye House, the National Maritime Museum Greenwich, and at Thonock Hall Lincolnshire, engraved by W. Greatbach; a head and shoulders version is in Liverpool Town Hall and a copy, attributed to Lonsdale, is in the RAMC Millbank.


The portraits [NPG 3689-NPG 3769] are oil studies for a large picture (about 6ft x 11ft), 'The Waterloo Banquet', now hanging at Stratfield Saye House. The banquet was held regularly at Apsley House on the anniversary of Waterloo, 18 June 1815, William Salter's picture representing the occasion in 1836, though it may have been conceived earlier. Two of the sitters, Bathurst and Manners, died in 1834 and 1835 and their portraits appear to have been painted from life, but the only banquet when both William IV and William II of Holland were present was in 1836 (The Times, 20 June 1836, 4e). The finished work, far more meticulously painted than the rather rough oil studies, was completed in 1840 and exhibited in June 1841 at 20 Threadneedle Street, the offices of Alderman Moon who published Greatbach's engraving of the picture. Neither Moon nor Salter were able to find a buyer for the picture until it was bought in 1852 by a friend of Salter's, Edward Mackenzie, who had just acquired a large house in the country, Fawley Court, Henley-on-Thames. It hung there until bequeathed to the 6th Duke of Wellington by his grandson Major W. R. D. Mackenzie.
The NPG oil studies are probably ad vivum sketches painted coarsely but with considerable verve and with close but not infallible attention to the details of uniform and orders. Several of them, if not all, were worked up into finished portraits for the individual subjects, the Mackenzie family tradition being that two sets were painted.

(Of the variant standing under an arch)
Line engraving by W. Greatbach published by Welch and Gwynne.