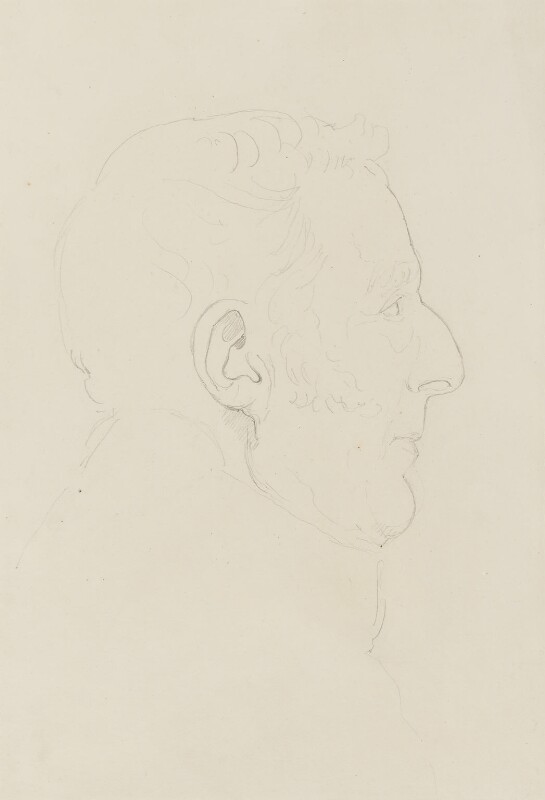 The original of this is at Stratfield Saye, drawn on paper watermarked: C WILMOTT/1819 and inscribed in pencil: Duke of Wellington/To Geo. Jones/with Mr Chantrey's comps/1822; another copy, marked with guide crosses, is in the British Museum (1859-5-28-87). It was etched by Mrs Dawson Turner. These drawings are probably copies from the camera lucida originals, although none has guide marks.
Sir Francis Chantrey’s Ledgers of Accounts (p 122) record an order from the Earl of Liverpool in 1820 for a bust of the Duke of Wellington and its execution and delivery at Fife House, 12 January 1824 for £157.10.0. The camera lucida drawings are at Stratfield Saye and the plaster models are in the Ashmolean Museum, Oxford. The prime marble, that commissioned by Lord Liverpool, is at Apsley House signed and dated: Chantrey Sc 1823, probably that exhibited RA 1824 (1011). Copies were ordered as follows:
(1) ? 1826-7, no year or commissioner given but the entry is annotated: 'This bust when executed had some spots on the neck and bosom which/induced Chantrey to lay it aside: it was afterwards sold in 1835/to A : Maclellan of Glasgow for one hundred guineas'; this is probably the marble bust in the Glasgow Art Gallery incised 1836.
(2) 1828 from Lord Egremont, executed and delivered 31 December 1828 (Sir Francis Chantrey’s Ledgers of Accounts, p 206), the bust is at Petworth dated 1828.
(3) 1828 from His Majesty for Windsor Castle, executed and delivered to Windsor March 1829 (Sir Francis Chantrey’s Ledgers of Accounts, p 211).
(4) 1832 from His Majesty through Lord Farnborough for Windsor, executed and placed in the Windsor Gallery 20 May 1826 for £210 (Sir Francis Chantrey’s Ledgers of Accounts, p 251); the bust is at Windsor dated 1835.
(5) 1836 from His Majesty for a temple at Kew, executed 2 August 1837 for £157.10.0 (Sir Francis Chantrey’s Ledgers of Accounts, p 278); probably the bust at Buckingham Palace dated 1837.
(6) 1836 from Lord Brownlow, executed in 1840 for £157.10.0 (Sir Francis Chantrey’s Ledgers of Accounts, p 278); the bust is at Belton House dated 1838.
The NPG drawings, which show the sitter with all the merciless accuracy of the camera lucida, have been developed by the sculptor into the magnificent Greek god of the marble busts; idealised drawings are at Stratfield Saye. Many marble copies exist and plaster and bronze versions were published by L. Brucciani 20 March 1836; an electrotype copy, reputed to have been cast from a Waterloo cannon, is in the hall of the old War Office, Whitehall. A colossal version dated 1841 is in the Examination Schools, Oxford.
Versions of a different type, in toga with head turned to his right, prominent jaw and side-whiskers, are in Dublin, at Felbrigg Hall, Hull Guildhall, and Sotheby's (New York) 23 April 1983 (691).
The equestrian statue outside the Royal Exchange was commissioned by the City of London in 1837. Chantrey attended a meeting of the Wellington Committee, presided over by the Lord Mayor, on 31 May 1837 and was introduced as the sculptor responsible for the statue (Sir Francis Chantrey’s Ledgers of Accounts, pp 282, 307). Drawings other than those in the NPG are in the Guildhall Library. Chantrey completed the model but died in 1841; the statue was finished by his assistant Henry Weekes and unveiled in 1844 on the anniversary of Waterloo, Wellington himself not being present (The Times, 19 June 1844, p 5b and Illustrated London News, 22 June 1844, p 404).

Profile to right with another on verso, both with the ear noticeably finished.