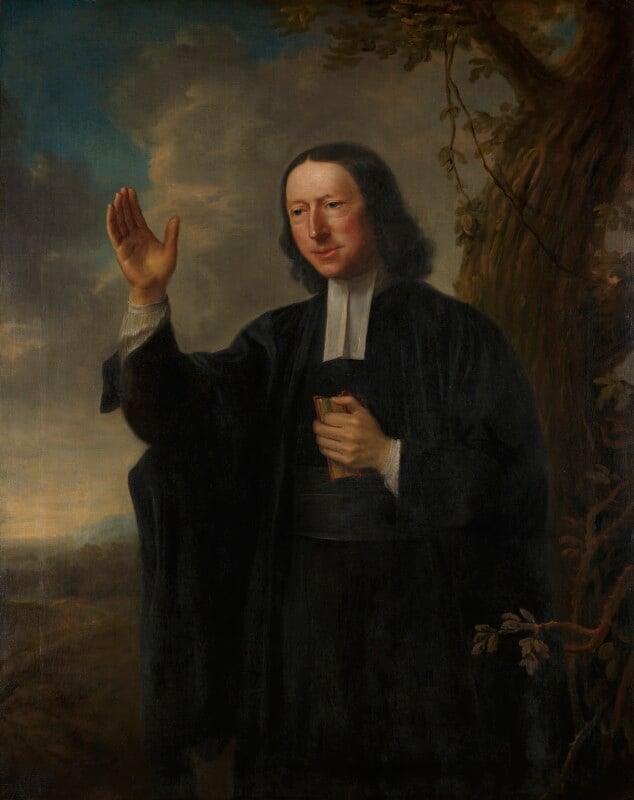 The provenance suggests that NPG 135, apparently the only extant contemporary version, is the prototype. At the time of purchase, 1861, it was, according to the dealer Henry Graves, 'in the same state as left by the painter but almost invisible by the Smoke of nearly a Century' [1] The cleaner Richard Smart wrote to Graves 14 November that year: 'I consider the Portrait of Wesley to be an undoubted work by Hone and the very picture from which the engraving was taken as the pin holes remain in the margin.' [2] The mezzotint, reversed, by J. Greenwood giving the sitter's age as 67 when published 1770 and lettered Done from an Original Picture in the Possession of Thos. Wooldridge Esqr of East Florida, indicates a repetition made and sent to America. A line engraving by Bland after Hone, of the same design but with simplified background, is lettered Aetatis 63 which places the date at c.1766. A 50 x 40 in. oil, somewhat dirty when seen at Christie's, anonymous property, 10 December 1965, lot 168, seems likely to be a later copy, as is the portrait presented by Lord Marshall, 1928, to Wesley's Chapel, City Road. [3]

Bought, 1861, from Henry Graves & Co, by whom purchased at the sale of 'Miss Wesley'; presumably by descent from the sitter. No such sale is recorded and no portrait is mentioned in Wesley's will, 20 February 1789. [1] A Miss Sarah (Sally) Wesley, the sitter's niece, is known to have died 1828 [2] but she is unlikely to be the owner referred to by Henry Graves (1806-92), sole proprietor of the firm in 1844. A possible identity might be an unmarried descendant of the sitter's nephew Samuel Wesley (1766-1837), the organist, who married, 1793, Charlotte Louisa Martin (d. 1845) by whom he had three children; only a son, Charles DD, is mentioned in the Dictionary of National Biography. Of the two remaining offspring one might have been a daughter who died c.1860. Alternatively the Miss Wesley in question might be Elizabeth (d. 1895), Samuel's daughter by a liaison with Sarah Suter.

The type engraved by John Greenwood, 1770.