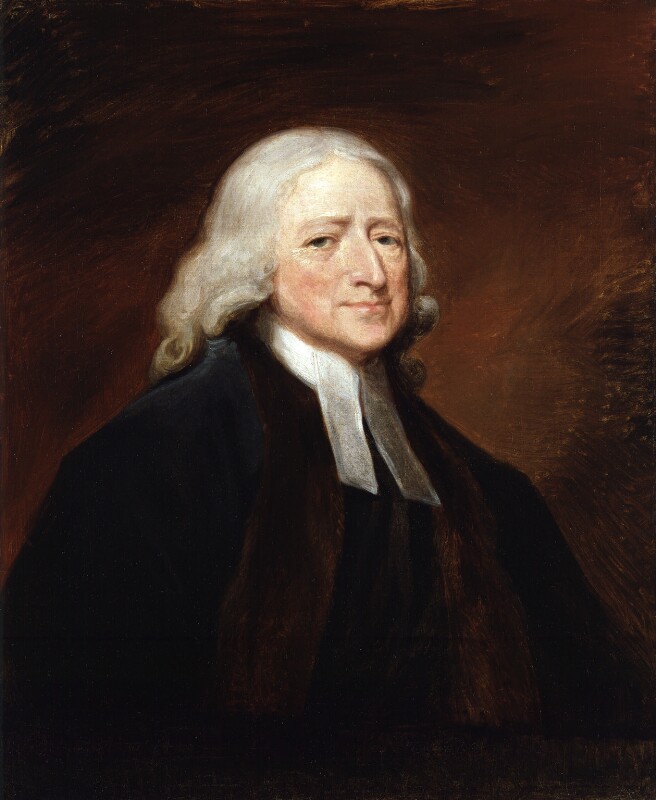 A MS label, on the centre bar of the relining stretcher, reads: This Portrait is the property/of the Rev. G. Stringer Rowe; also a printed label, top right, partly obscured by sealing paper, with the figures 75.

Wesley sat 'Three-quarters' (30 x 25 in.) to Romney on 29 December 1788 and 5, 12 and 19 January 1789, [1] the portrait being destined for his friend and admirer Mrs Tighe at whose earnest desire, as he noted in his journal, 5 January 1789: ‘... I once more sat for my picture. Mr Romney is a painter indeed. He struck off an exact likeness at once, and did more in an hour than Sir Joshua did in ten.' The following month, 7 February, he wrote to Mrs Tighe that the picture was finished and that 'It is thought to be a good likeness, and many of my friends have desired I would have an engraving taken from it ... if you have no objection, then I will employ an engraver that will do it justice ...’. [2] On 30 March J. Spilsbury, the engraver, paid £30 for the portrait and frame, presumably on behalf of Mrs Tighe, and it was then sent to Appleyard's of Wimpole Street for dispatch to Ireland on 19 July, as confirmed by the Rev. John Romney, the son and early biographer of the painter: 'The Reverend John Westley, [3] the celebrated preacher: three-quarters; for Mrs Tyghe and sent to Ireland.’ [4] The picture was sold for £40 from Mrs Tighe's home 'Rossana' by her executors about 1815. The purchaser was said to be a Wesleyan. [5]
Although NPG 2366 was believed by the donor's family to be by Romney and was apparently so accepted by Ward and Roberts, [6] the handling suggests it is more likely to be a good early copy. The artist records only one portrait, surely the oil painted for Mrs Tighe showing the sitter in plain gown as engraved by Spilsbury 1789, now in the Philadelphia Museum of Art. Its provenance goes back to the J. H. Butterworth sale, [7] Christie's, 1 March 1873, lot 65, bought Cassels, presumably the W. R. Cassels (d. 1907) who lent it to the Romney exhibition, Grafton Gallery, 1900 (74). The subsequent owner was McFadden but no sale or dealer is known. [8] A version was acquired, 1892, by Christ Church, Oxford, source unstated, [9] and a copy by Mrs Webber, Mrs Tighe's granddaughter, belonged c.1904 to T. W. Webber of Kellyvale. [10] An engraving by W. Ward, 1825, with vignette of Epworth Church shows the fur-trimmed gown as in NPG 2366 and the Christ Church versions. It is lettered G. Romney 1789 but with no indication of source.

Pin holes and some losses at corners; surface cleaned, blisters laid and revarnished, 1931.

Bequeathed, 1929, by Miss Mary Stringer Rowe, by descent from the Rev. G. Stringer Rowe, principal of Headingley College, Leeds, who bought it from a London dealer c.1842. [1]