1 of 43 portraits of Benjamin West 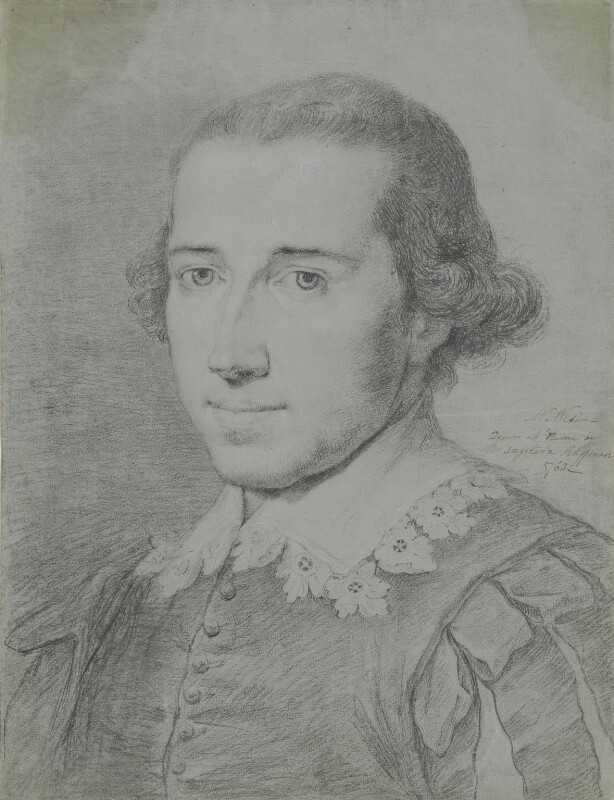 Inscribed at right above his shoulder in Angelica's writing: Mr West-/Drawn at Rome by/Angelica Kauffman/1763-.
A paper written by Percy Fitzgerald, formerly stuck to the back, is now in the NPG archive: By Angelica Kauffmann in Rome 1763. At this time, it is stated 'she drew everyone in Rome'. Mr West was of course Benjamin West later PRA - & who was in Rome in 1763 & greatly run after - this is fancy Ball dress. It is a fine drawing. PF.

West and Angelica Kauffmann met in Florence arriving in Rome in January 1763, Angelica being there to paint a portrait of Winckelmann. They exchanged portraits of each other, West aged 25 Angelica 21, West later claiming to have given her lessons 'in the principles of composition, the importance of outline and the proper combination and mixture of colors'. C. W. Peale believed that she wished to marry him (Robert C. Alberts, Benjamin West, 1978, p 48 and both portraits reproduced after p 78).

Head and shoulders to left in Van Dyck costume.