5 of 43 portraits of Benjamin West 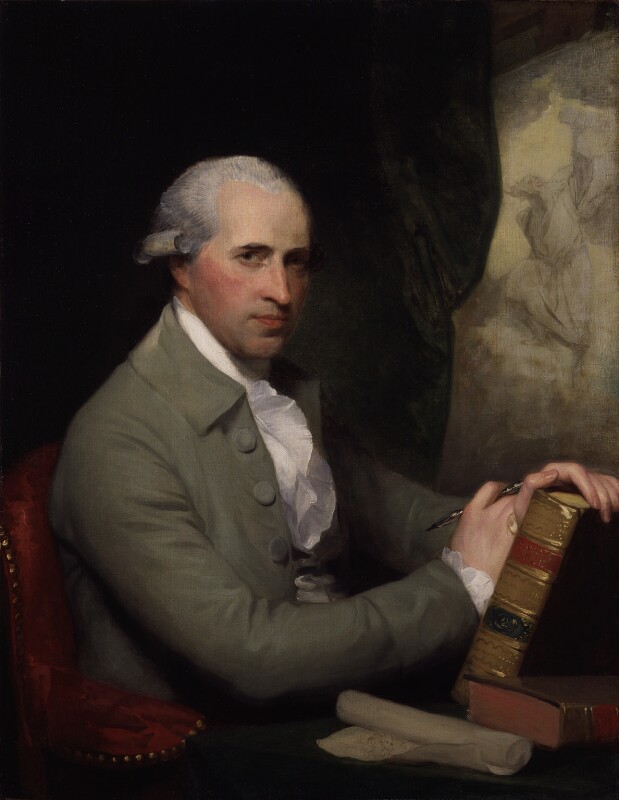 Gilbert Stuart arrived in London in 1775 and shortly afterwards lodged in West's house as pupil and assistant. His first portrait of West was exhibited RA 1781 (258), probably that now in the Tate Gallery (229) signed G Stuart; a head and shoulders version is in the Benjamin West Museum, Swarthmore College. It was the first of a series of artists' portraits painted by Stuart for Alderman Boydell, 15 of them being exhibited in Boydell's Shakespeare Gallery, Pall Mall in 1786 (listed in William Whitley, Gilbert Stuart, 1932, p 55). Many of them were engraved by Caroline Watson. The sitter in NPG 349 appears to be slightly older than in the Tate Gallery portrait though he seems to be wearing the same coat and the hair-style is more dressy. Looking back on the series in the Shakespeare Gallery a writer in the The Monthly Magazine in 1804 noticed the generally commonplace appearance of the artists of his time - 'the President and many others were delineated as smug upon the mart as so many mercers or haberdashers …' (William Whitley, Gilbert Stuart, 1932, p 56). West's enormous 'Moses' in the background was painted for Windsor Castle, dated 1784 and now hangs in the Palace of Westminster. The date of the portrait can be conclusively fixed between the publication of Anselm Bayly's Bible in 2 vols. 1784 and Caroline Watson's engraving, 1 March 1786. The hooks are clearly lettered Bayly's Bible on the spines and not Boydell's Bible as previously catalogued.
Another version, apparently a combination of the previous two, is in the Annmary Brown Memorial, Providence, Rhode Island; all three are described and reproduced in Lawrence Park, Gilbert Stuart, 1926.
An ink and wash drawing by West in the British Museum (exhibited 'Portrait Drawings', British Museum, 1974, no.180) is inscribed in Stuart's handwriting: Mr Stewart painting Mr West's portrait and dated in another hand 1783. It shows Stuart, looking ill and haggard, and painting a portrait that may possibly be NPG 349.

Painted for Josiah Boydell; Boydell's Shakespeare Gallery and inherited by Messrs Graves of Pall Mall from whom bought by the Trustees in April 1872 (correspondence missing from NPG archive).

Stipple by Caroline Watson lettered with artist's name as 'Gabriel Stuart', published by John & Josiah Boydell, 1 March 1786 'from the Original Picture in the Proprietors Gallery'.