4 of 171 portraits matching these criteria: 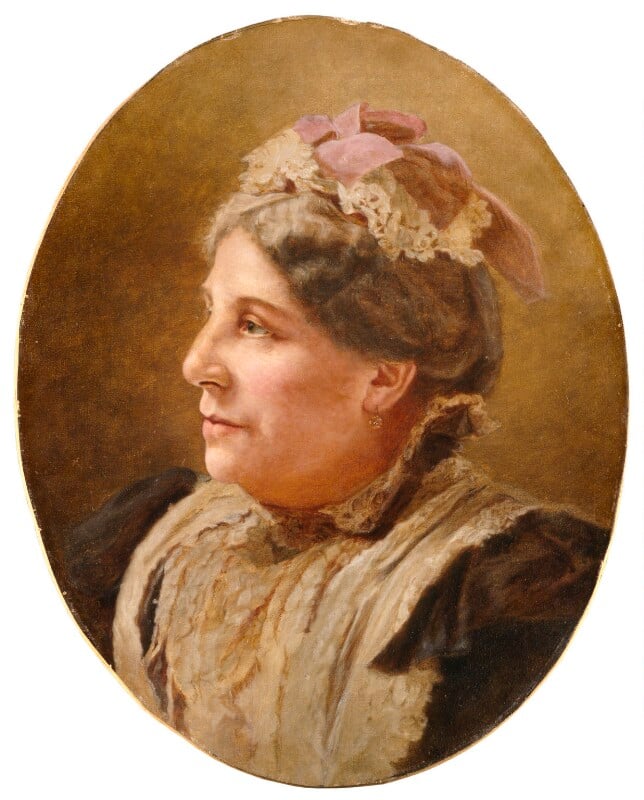 NPG 4437 was purchased by National Portrait Gallery Trustee Robert Wyndham Ketton-Cremer for £15, and presented by him to the Gallery in March 1965. In a letter to the Director David Piper, Ketton-Cremer, also Weston’s great-nephew, admits ‘I wish I had known Aggie Weston better. But she was usually based on Portsmouth, whereas her sister Emily, after whom my mother was named, lived at the Sailors’ Rest at Devonport, and therefore figures more largely in my childhood memories.’ [1]

The portrait was offered for sale by H.G. Tozer (of 50 Cobourg Street, Plymouth) in December 1964: ‘I have a very fine oil painting of “Dame Agnes Weston G.B.E”. As nobody I know has seen another painting of her, I thought you might be in need of it.’ [2] Little information about the portrait is known, neither the artist, execution date, nor how Tozer came to be in possession of the painting. At some point the original rectangular canvas was laid on cardboard and the two were cut together into an oval – possibly to fit the current frame, although it is also possible that this was designed according to the dimensions of the portrait. [3] The domestic appearance of the frame suggests that the work was intended to function as a private memento, perhaps to reside with the family or even to hang in the Devonport Royal Sailors’ Rest after Weston’s death, although no evidence has been found to prove that the portrait functioned in either capacity. [4]

No reference to a sitting for the portrait has been located and it may have been executed posthumously shortly after her death in 1918. Contemporary newspaper reports announcing Weston’s death certainly attest to her status at the time, recognizing her influence with regards to the development of the Royal Sailors’ Rests and improving the welfare of naval seamen and their families. [5] Comparisons can be drawn between the portrait and published photographs of the sitter. Her appearance resembles an image reproduced in oval format in the frontispiece of Weston’s 1909 autobiography, including details of dress such as the bodice and lace collar (see ‘All known portraits, Photographs, c.1909’). An earlier photograph published in 1898 (in reverse) is comparable to the pose in the oil (see ‘All known portraits, Photographs, c.1890, pose (b)’). The positioning of the head and neck is very similar, although NPG 4437 portrays a more mature Weston, reflecting her appearance in her final years (see ‘All known portraits, Photographs, c.1910–18’).

Arguably, without study of the sitter from life, the artist produced a somewhat romanticized portrait of Weston, leaning towards the popular image of her as ‘The Mother of the Navy’. Alston Kennerley explains that the ‘“mother figure at the heart of a stable home” was a common fantasy among seafarers’, which the public representation of Weston fitted: ‘The combination of stories about her tea parties for sailors and her rescuing drunks, with the pictures of a mature, rounded face, severe hairstyle, sober clothes, and fuller figure, served well to foster something of a mother cult.’ [6]

The artist effectively emphasizes these rather matronly qualities, not immediately evident in photographs of Weston, paying most attention to the depiction of the head and face, whereas other areas have much looser brushwork, with traces of the underdrawing showing through. Indeed, the features have been sensitively rendered to reflect an expression of homely warmth and empathy, although possibly at the expense of accurate likeness. Weston did posses the physical attributes described above, but her appearance in contemporary photographs also suggests a certain steeliness of character and determined resolve, not captured in NPG 4437. This single-mindedness in relation to her cause provoked occasional negative reactions, at odds with the image of the sitter as the well-loved, well-meaning benefactor. In 1911, Weston and her Rests were subjected to strong attack over her repeated ‘begging appeals’ for funds. In Charity and the Navy, ‘Lionel Yexley’ criticizes Weston’s continued use of the image of the irresponsible, drunken seaman as a fund-raising device, as being hugely outdated and offensive: ‘so long as the naval man is looked on as an object of pity and charity, he can never expect that respect which he demands and has been too long denied’. [7]

1) Letter from Robert Wyndham Ketton-Cremer to David Piper, 1 Mar. 1965, NPG RP 4437. Ketton-Cremer was born at his mother’s family home in Plymouth, 1906.
2) Letter from H.G. Tozer to NPG, 15 Dec. 1964, NPG RP 4437. In fact, another oil portrait of Weston did hang in Portsmouth’s Guildhall, but this was destroyed during the Blitz in 1941 (see ‘All known portraits, Posthumous portraits, c.1920’).
3) Jacob Simon identifies the frame as a commercial product, dating from between 1890 and 1930 (Nov. 2011).
4) The Devonport Rest was destroyed during the Blitz in 1941. It is known that a memorial stained-glass window featuring a portrait of Weston was erected at the rest in 1926 (see ‘All known portraits, Posthumous portraits, c.1918–26’).
5) These contemporary reports reproduce various photographs of Weston but none feature NPG 4437, suggesting that it was not available for reproduction at the time and supporting the notion that it is a posthumous portrait.
6) Kennerley 2004.
7) Yexley 1911, p.4.

Head-and-shoulders to left, profile to left, with lace collar, bodice and cap with pink ribbon.

Purchased by Robert Wyndham Ketton-Cremer and presented by him to the NPG, March 1965.