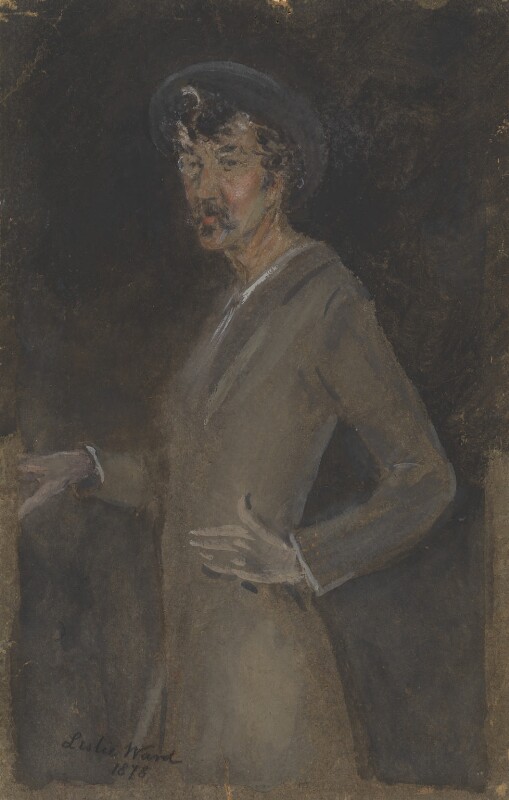 In 1877 Whistler was much in the news due to his impending libel case against John Ruskin (see ‘Biography’), and the bitter quarrel with his patron Frederick Leyland over the decorative scheme for the Peacock Room at Leyland’s house in Prince’s Gate, London. [1] So it was fitting that he featured as Vanity Fair’s fiftieth ‘man of the day’ in its edition of 12 January 1878. The artist was Leslie Ward (‘Spy’) and the published print was captioned ‘A Symphony’, a reference to the titles Whistler gave his own works. Whistler seems to have liked the image for he distributed a number of prints with his butterfly signature and dedications. [2] In difficult times this sharp and instantly identifiable image, together with the favourable biographical sketch by Jehu Junior (Thomas Gibson Bowles), was good publicity for the artist.

For his part, Ward was fascinated by his subject. He mentions him several times in his memoirs, and refers to the Vanity Fair portrait:

Somewhere about the same period I did Whistler, who was an excellent subject, but his unlimited peculiarities lay more in his gesture and speech and habits. I never went to a social function at which he was present without hearing his caustic, nasal little laugh ‘Ha-ha-ho-ho-he-he’ raised at the wrong moment. For instance, when a song was being sung in a drawing-room, or when a speech was being made at a public dinner. [3]

NPG 1700 is a three-quarter-length figure sketch, the face worked up in choppy gouache and the body lightly indicated. On the verso there is a related whole-length sketch in watercolour; see NPG 1700a. Both drawings are signed ‘Leslie Ward’ rather than ‘Spy’, and carry the year of publication, 1878. They are preparatory studies for the final version, the undated watercolour, signed ‘Spy’, now in the National Gallery of Art, Washington, DC, Rosenwald Collection (1949.5.521); the main difference between the National Portrait Gallery studies and the image as published is the position of the hands. [4] Gallatin 1918 lists three Ward drawings of Whistler: nos 241 and 243 correspond to NPG 1700 and NPG 1700a, no.242 to the lithograph, and no.244 to a crayon caricature by Ward, now in the S.P. Avery Collection, New York Public Library. [5]

The drawings (‘which we have recently acquired’) were offered to the NPG for £40 by the dealers Ernest Brown & Phillips in March 1913.[6] They came with no earlier history. The millboard support is in poor condition.

Purchased by the Gallery from Ernest Brown and Phillips, April 1913.

In Pursuit of the Butterfly: Portraits of James McNeill Whistler, National Portrait Gallery, Washington, DC, 1995 (no cat. no.).

For copies of the print after the finished drawing, see ‘All known portraits, Caricatures, c.1877–8’.