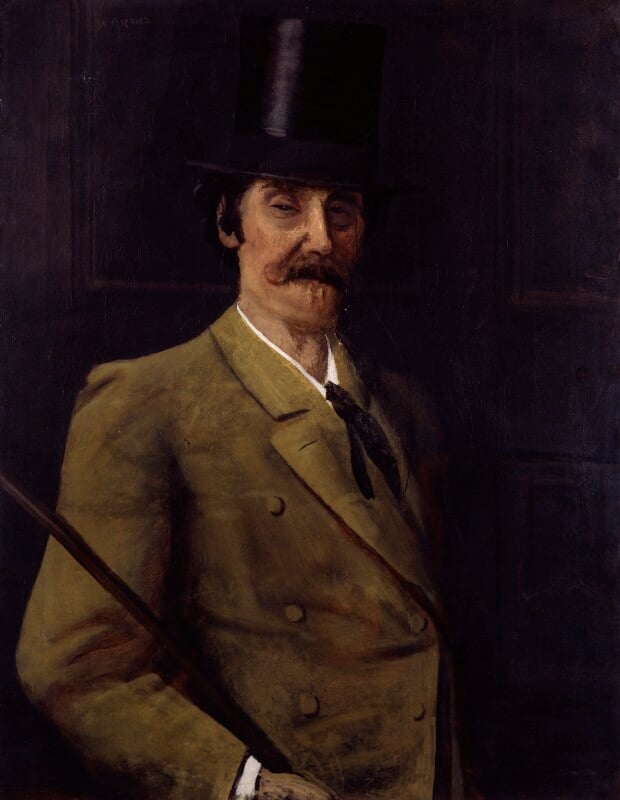 Whistler moved to 7 Lindsay Row, Chelsea, in March 1863. Among his neighbours were the Greaveses, a family of Thames watermen. Walter and Henry Greaves (1844–1904) became his guides on the river, pupils and devoted assistants in the studio. Walter Greaves produced more than a hundred portraits of Whistler, most of them from memory.

Some of the Greaveses’ Whistler images are dated; those of the early 1860s to the late 1870s are records of the period of friendship. Such works include scenes with the artist sketching on the Thames (1860, priv. coll.); in groups at the Cremorne Gardens (see Denker 1995, pp.103–5, figs 4:8–10); and at work in the studio, several of which show him painting the portrait of his mother (Arrangement in Grey and Black, 1871; M. D’Orsay, Paris).

NPG 4497 is a life-size half-length, the dark tonality relieved by the mustard-yellow coat; the hand holding the cane is barely sketched in and, unusually in the iconography, the monocle is worn in the left eye. The canvas is signed but not dated. In public collections, Walter Greaves’s portraits of Whistler include two oil half-lengths with Thameside backgrounds: see National Portrait Gallery, Smithsonian Institution, Washington, DC (1870; NPG.91.125) and Ferens Art Gallery, Hull (1874; FER158808). [1] Further Greaves portraits went through the salerooms following Eric Denker’s study of Whistler’s portraiture in 1995. [2] Most of them are undated or show inscriptions that are problematic or frankly apocryphal. Even where there are dates these may refer to when the scene actually took place – sometimes decades earlier. All of which precludes building a chronology of portraits of Whistler by Walter Greaves. A.E. Gallatin listed 19 such works but none of them appears to correspond to NPG 4497. [3] The portrait is not cited in Denker’s (selective) 1995 iconography. [4]

Greaves’s portrait of Whistler belonged at one time to William Marchant of the Goupil Gallery, London. Marchant bought ‘more than fifty canvases’ rolled up and in poor condition, from a second-hand book dealer, Walter Spencer, and these formed the basis of the notorious Greaves exhibition at the Goupil Gallery in 1911; NPG 4497 may have been part of this job lot. [5] At any rate it was still in the Marchant family collection in Birmingham in the mid-1960s. [6] It was soon after purchased by the National Portrait Gallery, for £240, unframed, from the dealer Kyril Bonfiglioli. [7] A frame (‘gilt ogee section reeded sight Whistler oak moulding frame, £25’) was purchased from Arnold Wiggins & Sons, Ltd, 20 March 1967, for the painting’s display.

1) The Rosenbach Museum and Library, Philadelphia, formerly owned a number of portraits of Whistler by Greaves, purchased in 1911. These were de-accessioned in January 2011 (see press release, 19 Jan. 2011).
2) Sotheby’s NY, 29 Oct. 2002 (17); Christie’s Shoreham, 11 June 2003 (11); Christie’s, 14 June 2005 (29). For further details of Whistler portraits by Walter Greaves see NPG SB (Whistler), and the Local Studies and Archives (W. and H. Greaves scrapbook, catalogues and newspaper cuttings) and Art Collection, Kensington Central Library for ‘about 140 items’.
3) Gallatin 1918, nos 36–54.
4) Denker 1995, pp.97–108.
5) Walter T. Spencer, second-hand book dealer, 27 New Oxford St; Pocock 1970, p.157. The Greaves exhibition caused a sensation, raising questions of artistic licence and publicizing Whistler’s treatment of the brothers; in the end, however, it was Walter Greaves’s reputation which emerged most damaged.
6) ‘Curiously enough I was the first person to see all Mrs. Marchant’s things in Birmingham, and I think stimulated her to sell; she still has a few thing left, including most of Greaves’ graphic work.’ Letter from R.L. Ormond to J. Ingamells, 10 May 1967, NPG NoA (Whistler). Mrs Cicely Marchant was the daughter-in-law of William Marchant.
7) Kyril Bonfiglioli (1928–85) of Bonfiglioli Ltd, 13 The Turl, Oxford, art dealer and author of thrillers (see ODNB).