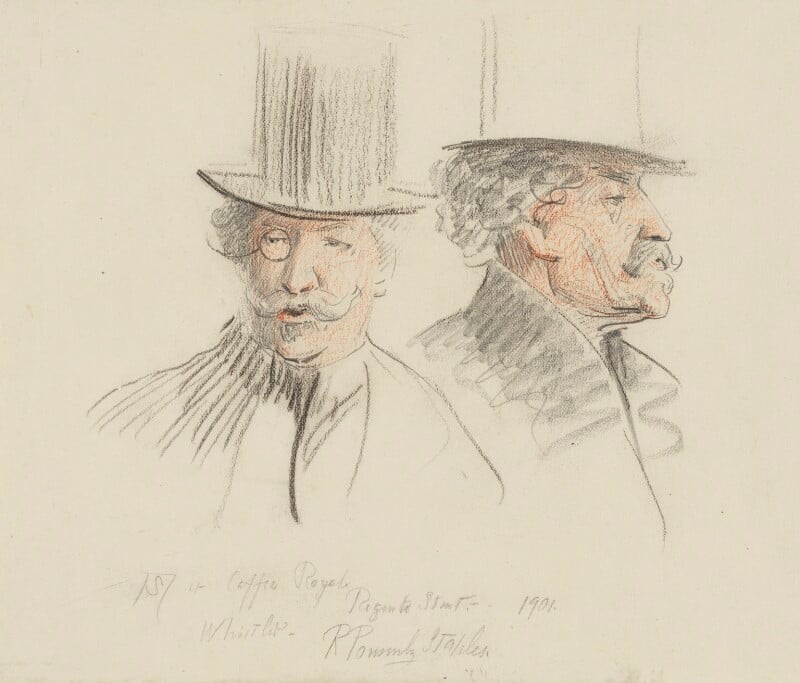 In January 1928 Robert Ponsonby Staples [1] approached Viscount Ullswater to try to interest him – as a National Portrait Gallery Trustee – in three of his portrait drawings. Staples was then in his seventies and living in fairly straitened circumstances at Lissan House, Cookstown, Northern Ireland. Although only one drawing was accepted by the trustees, that of Whistler, Staples was grateful for the eight guineas, explaining, ‘I live under most curious circumstances under the Irish Court of Chancery & 50% of my Allowance has to be spent in keeping up a rather large place with several miles of Avenues.’ [2]

Staples recalled that the heads were ‘very rapidly executed’ at the Cafe Royal. [3] It is a late image, and although Whistler appears alert in fact he was declining, as can be seen in photographs of the period. ‘He was never really strong after the autumn of 1900’, wrote Joseph Pennell, ‘and even earlier than this the doctor in London warned his friends that he was failing.’ [4] Staples’s neat little double sketch is not listed in the Whistler iconographies, Gallatin 1918 and Denker 1995.

Staples continued to paint into very old age; in 1928 he sent two exhibits for sale at the Royal Hibernian Academy, Dublin (33, 125). He eventually died in 1943, aged ninety, a long-term advocate of ‘fresh air and early barefoot walking’. The contents of his studio were sold by Phillips on 11 June 1991.

The artist, from whom purchased, April 1928.