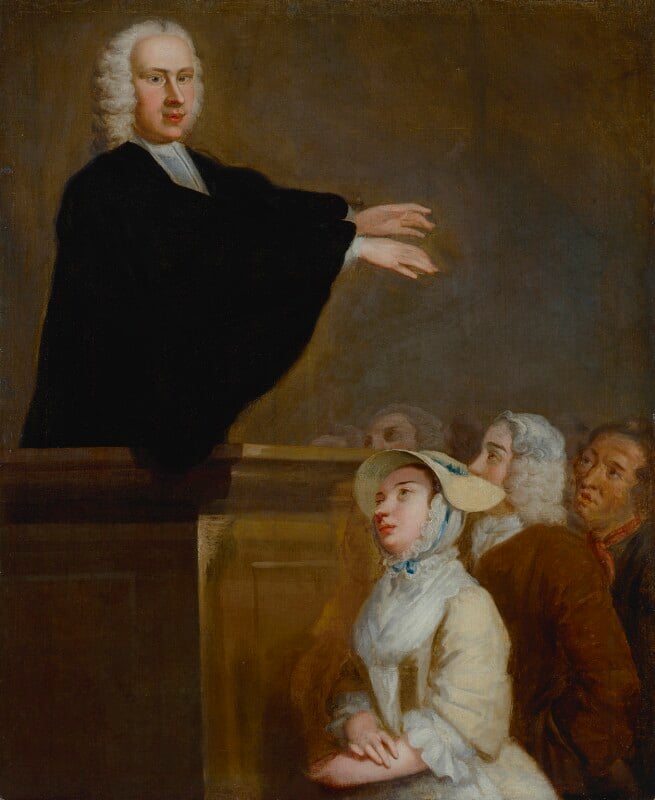 On the back of the relining canvas, the auctioneer's chalk marks: July 1961/158 p. in the top right hand corner of the stretcher a torn printed label 14; Scharf noted at Christie's, 16 May 1861, [1] a paper formerly on the back of the stretcher: Whitefield holding forth to his congregation. Hogarth but this label had disappeared by the time the picture was acquired.

According to Christie's catalogue, 27 April 1861, the woman in the congregation is supposed to represent Mrs James, of Abergavenny, whom the sitter married in 1741; the village attorney and the blacksmith are also said to be depicted. No portraits of Mrs Whitefield appear to be known for comparison.
The Dictionary of National Biography gives no authority for its statement that NPG 131 was painted about 1737. [1]
Faber's engraving is lettered quite specifically John Wollaston Jnr. Pinxt. 1742. In the absence of any evidence to the contrary, it is to be preferred as a contemporary source. It should also be noted that although Vertue [2] seems to indicate only one Wollaston, Walpole, his source itself one of the sons, mentioned a son who followed his father's profession. He attributed the portrait of Britton, NPG 523, to the father. [3] Britton [4] and Whitefield are on a different scale, which makes comparison difficult, but could well be by separate hands. Walpole does not mention Whitefield.

Worn; a stretcher mark along the top; discoloured repaints and varnish; pin-holes at corners; an x-ray revealed no change of design under the apparent pentiment to the left of the lady.

Bought, 1861, at Christie's, 19 July, lot 158; previously lot 133, Christie's, 27 April 1861, as by Hogarth, from the Charles Salt collection, Haldon House, Christie's catalogue stating that it had been purchased at the sale of Lady Miles, Arlingham Court, Gloucester; sketched by Scharf at the Salt sale.