3 of 102 portraits by John Russell 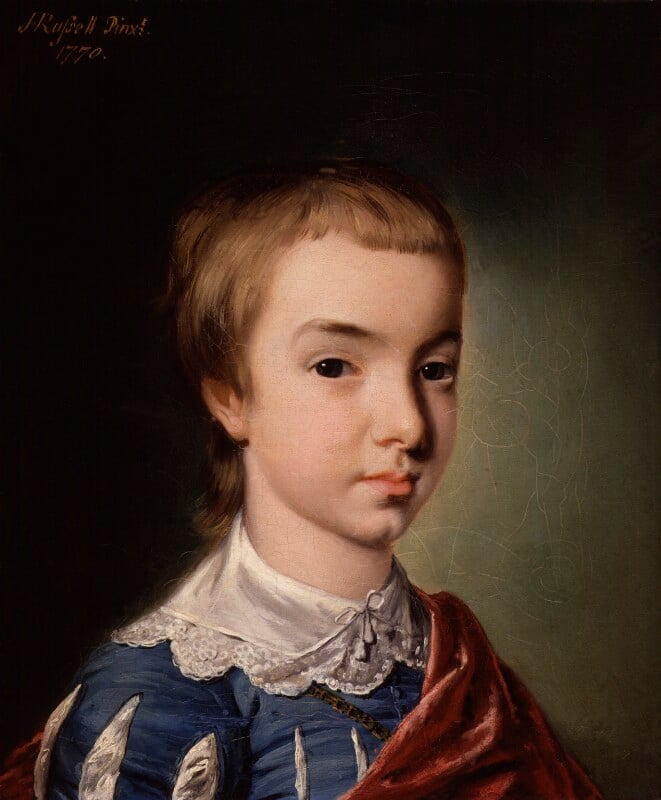 Signed and dated top left in yellow paint: J. Russell Pinx/1770, and inscribed on the stretcher in ink: For Barbara.

The portrait was painted in Wilberforce's aunt's house in Wimbledon where the sitter was described by the artist as 'sweet young Wilberforce' who even at that age had the 'appearance of conversion upon his soul'; with Mrs Wilberforce he had a 'lively conversation and was greatly edified' (G. C. Williamson, John Russell R.A., 1894, pp 43-4). Russell painted the portrait in 1770 and made at least two copies: (1) in a private collection Yorkshire descending from Robert Isaac Wilberforce, reproduced Robin Furneaux, William Wilberforce, 1974, plate 1b, and (2) in Lord Birkenhead's collection descending from Samuel Wilberforce.
Later portraits of Wilberforce by Russell are:
(1) Oil of 1801 in City Art Gallery, Leeds (135), painted for the Leeds surgeon William Hey and referred to in Wilberforce's Diary, 31 July 1801: 'Mr Russell painted my picture for W. Hey. He painted me above thirty years before. A very religious man, very high church indeed' (Life of Right Rev Samuel Wilberforce, I, pp 5-6); half-length in dark green coat holding Slave Trade Abolition Bill and attributed by Williamson possibly to John Russell's son William (op. cit., p 152).
(2) Oil painted for Isaac Milner, Dean of Carlisle, and known from a line engraving by James Heath 1807 lettered with the Dean's name as owner. It was bought at the sale of Milner's effects in 1820 and later belonged to Sir Benjamin Brodie (F. H. Webb's note in a collection of photographs of Russell portraits in the V&A Museum), half-length similar to (1) but with the addition of two volumes of Parliamentary Register and Debates (G. C. Williamson, John Russell R.A., 1894, p 138). Heath's print was used for the centre-piece of an anonymous wood-engraving 'Heroes of the Slave Trade Abolition'.
(3) Pastel head and shoulders without the Bill signed and dated 1801. This probably the portrait formerly belonging to Mrs Charles Edwards of Faringdon (G. C. Williamson, John Russell R.A., 1894, p 140 and was in Christie's anonymous sale 28 March 1908 (87) together with its companion portrait of Mrs Wilberforce; both were lent to East Yorkshire Exhibition, Hull 1959 (45-6) by Mrs Arnold Reckitt, a descendant, and are now in a private collection Hull (both reproduced Robin Furneaux, William Wilberforce, 1974, plates 9-10).
(4) Oil on wood panel in a private collection Yorkshire.
(5) Oil copy of (1) is in Wilberforce House, Hull.