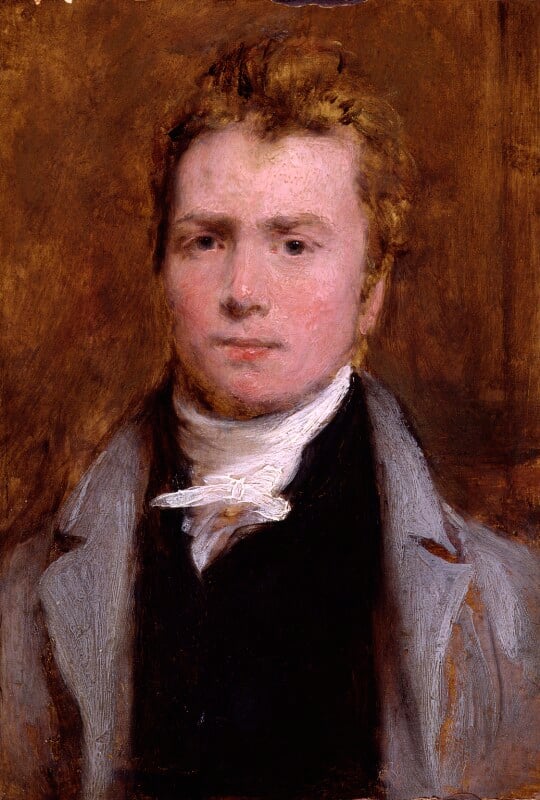 The date of this self-portrait is secured by an entry in Wilkie's Journal for 28 December 1813: 'Sent off some pictures to my brother in India; viz. ... and three portraits of Thomas, Helen and myself. The pictures were all painted very thin, and with nearly one coat of colour. The vehicles used were gumption, but the three last with drying oil and mastic varnish' (Allan Cunningham, Life of Sir David Wilkie, 1843, I, p 387). This is confirmed by a letter from Wilkie's brother Thomas to his niece Sophia Winfield, 17 July 1858, 'having a very clear recollection of the painting of that as well as the one of myself and of their transmission to your father and mother in India'. Wilkie's sister Helen (Mrs Hunter) wrote on 21 July 1858: 'I am happy to assure you that the Picture in question is the portrait of Sir David Wilkie. It was painted by himself about the year 1816 or 17 [sic] at the request of my brother Captn Wilkie in India & sent out to him along with portraits of other members of our family. At Captn Wilkie's death [in 18241 it came into the possession of his eldest daughter Mrs Winfield whose property it now is' (letters dated July 1858 in NPG archive; Captain Wilkie's widow died in Edinburgh in 1828).
An oil painting of similar appearance and date was sold with an album of drawings and notes by Wilkie at Christie's 13 July 1971 (21) and is now in the Scottish NPG, almost a total wreck. Other self-portraits are in the Scottish NPG (two), in the Musée des Beaux Arts, Pau, formerly in the Peel collection, and at Bowhill (identity doubtful).

John Wilkie, the artist's brother, and bought by the NPG from his daughter, Sophia Mary Winfield, in 1858.