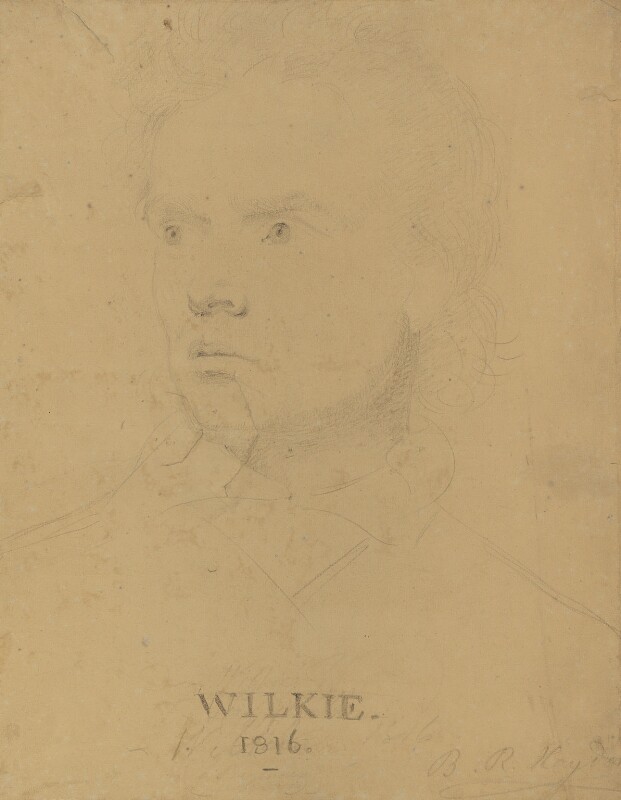 Inscribed in large capitals: WILKIE. 1816 over a semi-erased scribble of a similar inscription, and signed lower right: B.R.Haydon.

Haydon's friendship with Wilkie began in their student days, a drawing of Wilkie in argument, dated 20 December 1807, being reproduced in Correspondence and Table Talk, 1876, I, p 252; and a vivid description of the process of taking a life-mask from Wilkie's face is given in Haydon's Diary for 24 July 1815: 'Made a cast in the evening of Wilkie's face with Wyburn, our Paris friend. Never had such fun as Wilkie lay on the ground looking like a Knight Templar on a monument, with his features battered out. We quizzed him until we roared'. There is no mention of the 1816 drawing in either of their Diaries but it is possible that Wilkie's head was used as a study for one of the figures in 'Christ's Entry into Jerusalem', now in Cincinnati, on which Haydon was working between 1815 and 1820; Haydon records a meeting on 3 December 1816 when 'Wilkie passed the evening' and was 'completely conquered' by the picture. Later on Wilkie and Haydon fell apart, due partly to Haydon's envy at Wilkie's meteoric success, and there are frequent disparaging references in Haydon's Diary, for instance to Wilkie's 'gaunt and feeble' appearance (27 July 1828), after a serious illness.

Early history unknown until given by Sir W. B. Hardy in 1921.