1 of 174 portraits of King William IV 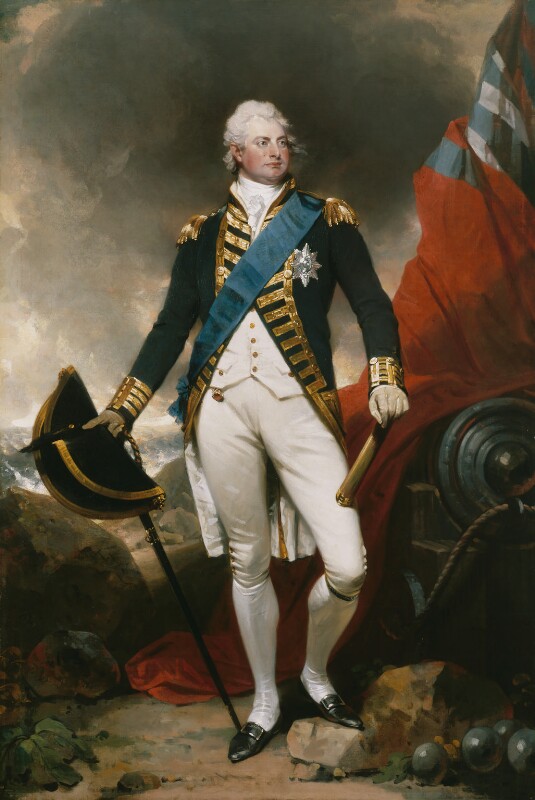 Inscribed on a label, formerly on the back of the stretcher, below a cutting from Christie's catalogue of 18 March 1921: The above portrait was purchased at the Sale by the/late Wm. Lawson Peacock and is this day purchased from/his Exers. by Lieut. Col. Archer Shee M.P., D. S. O. and sent to/Ashurst Lodge Sunningdale - Ascot. June 7. 1922

Scharf's pencil drawing of the portrait at Kensington Palace is identical in pose and composition with the NPG portrait, which is possibly the same picture. There is no record of such a portrait still in the Royal Collection, so it may possibly have belonged personally to some member of the Royal Family and subsequently have been sold. According to Hugo Wemyss (letter of 18 October 1932, NPG archives) the NPG portrait was bought by him at a sale conducted by John Taylor, a furniture remover, in a room not normally used as a saleroom in Sloane Street around 1900, where it was catalogued as a portrait of an unknown gentleman in naval uniform.
The attribution to Shee was first suggested by Cohn Agnew, on stylistic grounds, and is certainly right (Scharf listed the Kensington Palace portrait as 'apparently by Hoppner'). The head is almost identical with that in Shee's full-length portrait of William in the Walker Art Gallery, Liverpool, except that the features of the NPG picture suggest a slightly younger man; the Liverpool portrait was exhibited RA, 1800 (12), engraved by and published J. Ward (example in NPG). Both portraits were presumably based on the same sitting from life, and show the sitter in a similar pose, though with a different setting and accessories. The costume in both is the full-dress uniform of an admiral, of the period 1795-1812, with the addition of peer's robes in the Liverpool version; William was appointed an admiral on 14 April 1799 (information from P. G. W. Annis of the National Maritime Museum, Greenwich). The two portraits may have been commissioned to celebrate this event. Another portrait of William IV by Shee was exhibited RA, 1801 (158).

Light greenish-blue eyes, healthy complexion, grey (powdered?) hair. Dressed in a white stock, dark blue gold-braided naval uniform, with a white waistcoat and breeches, and black shoes with silver buckles, wearing the star, blue sash and garter of the order of the Garter, holding a cocked hat and sword in one hand, and a brass telescope in the other. A large mainly red flag draped over a cannon on the right, with four cannon balls below. Predominantly dark greyish sky, bluish-grey sea, and mainly brown rocky foreground.