1 of 61 portraits by Henry Edward Dawe 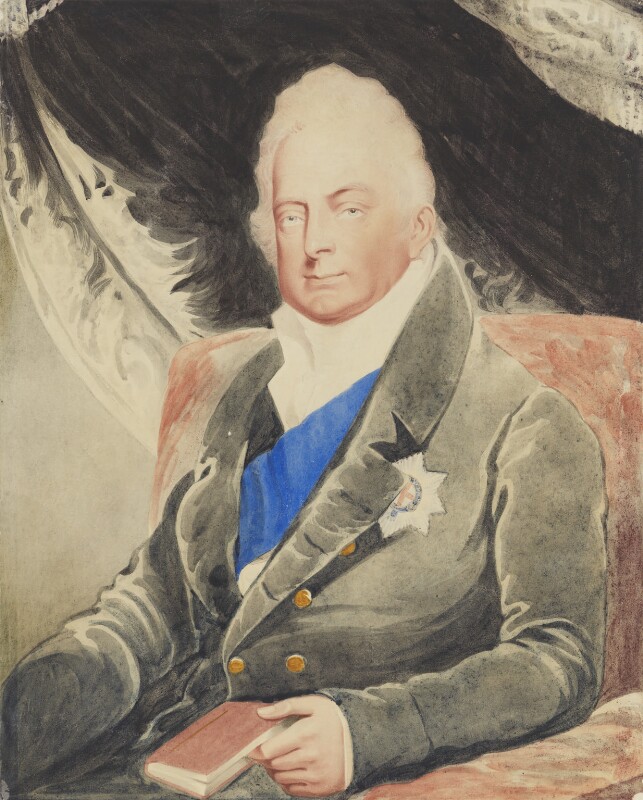 This is similar in pose and features, though different in accessories, to the half-length engraving by J. Cochran, after a painting by Dawe then owned by Queen Adelaide, published Fisher, 1831 (example in NPG), for Jerdan's 'National Portrait Gallery'. A three-quarter length version of this type, possibly the same picture, was engraved by Dawe, published Colnaghi, 1830 (example in British Museum). A similar three-quarter length painting is in the collection of Earl Spencer, and another, wrongly attributed to Lawrence, was in the Duke of Cambridge's sale, Christie's, 11 June 1904 (lot 97). A related miniature by C. Jagger, then owned by the Countess of Erroll, was engraved and published by H. Dawe, 1827 (example in NPG), and another similar miniature, presumably by or after Jagger, is owned by the Duke of Richmond.

The water-colour is very faded. Brownish eyes, greyish hair. Dressed in a white shirt and stock, blue sash and silver star of the order of the Garter, and green coat. Seated in a reddish chair, holding red leather book. Background colour grey and green.

A. Leonard Nicholson, purchased from him, 1898.