2 of 18 portraits by George Baxter 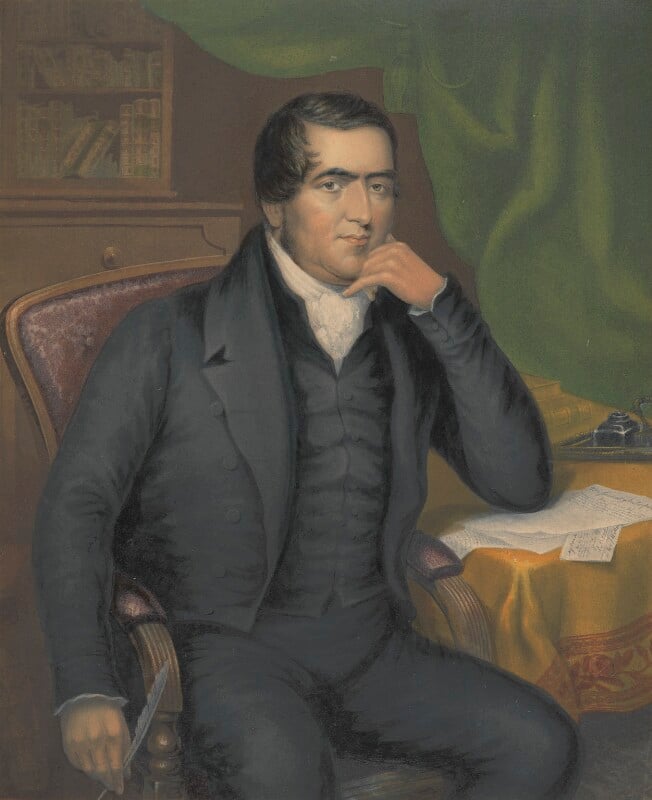 Engraved on the original cream-tinted mount: The Lamented Missionary/THE REV JOHN WILLIAMS/Who was cruelly Massacred at Erromanga,/Seated in his Study, composing his celebrated Missionary Enterprises, which have been aptly designated as a Supplement to the Acts of the Apostles. Designed and printed in Oil Colours by the Patentee, George Baxter,/London. Published by G. Baxter, 3 Charter House Square, April 1st 1843,/& sold by Messrs Hamilton & Co, Ward & Co, Simkin & Co, & by the Country Agents.

Baxter's first portrait of Williams was drawn from life during the missionary's last visit to London 1834-7 and was published as a Baxter print in 1837 (C. T. C. Lewis, George Baxter, 71). It shows the sitter half-length to left with the sea and a missionary ship through the window to left, and was the first of a series of Baxter prints of missionary subjects 1837-47. Baxter was appalled at the massacre of his friend and published several prints of Williams himself, a whole-length portrait of Te Po, a chief of Rarotonga who had helped in the missionary work, two prints of the missionary ship Camden, 'The Reception of the Rev. J. Williams at Tanna' and 'The Massacre of the Lamented Missionary' (C. T. C. Lewis, George Baxter, 79-82). Williams in the preface to his Missionary Enterprises said that Baxter's art was 'exceedingly beautiful'. NPG 4956 is of the type chosen to be given to the missionary ship John Williams, successor to the Camden, and shown to the natives who had killed Williams. It formed one of a trio of Baxter missionary prints, the other two being of Robert Moffat and William Knibb.