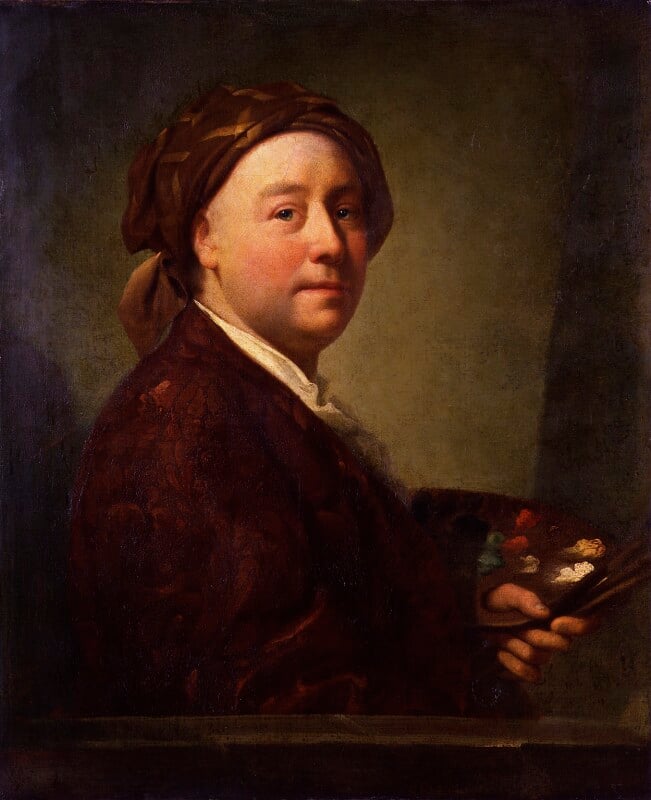 A close version of the portrait painted in Rome in 1752 by Mengs, with a number of minor differences: easel, canvas, alcove and chairback are obscured, his right arm and hand are hidden behind a balustrade, the colours on the palette are differently arranged, the lozenge-shaped pattern on the turban is more pronounced and the lighting on the face and background wall is more intense. The attribution of NPG 1803 varied between Wilson and Mengs until 1948, when Cooper convincingly equated it with an entry in Benjamin Booth’s MSS as ‘a [portrait] Of Wilson by his old Friend Penny’. [1]
Perhaps NPG 1803 was made when Wilson sold the original Mengs to Sir Watkin Williams-Wynn (from whose direct descendants it was acquired by Cardiff in 1947); Penny also painted Booth’s daughter-in-law, Jane Salwey, Mrs Booth, in 1774.[2] A bust-length drawing in the British Museum (1881.6.11.201), almost a replica of NPG 1803 and on the same scale, once thought to be by Mengs, is now attributed to Penny as a preparatory study for NPG 1803. [3]

Clear blue-grey eyes, wearing a dark brown turban with yellow strapping, a flowered silk deep red coat; his palette displays turquoise, reds, yellow, white and deep green; a landscape painting on his easel and a stone ledge across the foreground.

Given by the sitter to Benjamin Booth;1 his daughter Elizabeth Mary Booth; her sister Marianne, who married Sir Richard Ford (d. 1821), thence by descent to his great-grandson John Ford, by whom bequeathed 1917.2

1 An ink label, formerly verso, in the hand of Sir Richard Ford: Portrait of Richard Wilson R.A. attributed by tradition in my family to himself: it was given by the artist to my grandfather Benjamin Booth who was his early patron: it [was always considered] to be more likely to [be by Mengs] Richd. Ford.
2 Presented by Richard Ford as executor for his brother, John, a Trustee of the NPG 1915-17. For John Ford, see Wal. Soc., LX, I, 1998, pp 48-50.