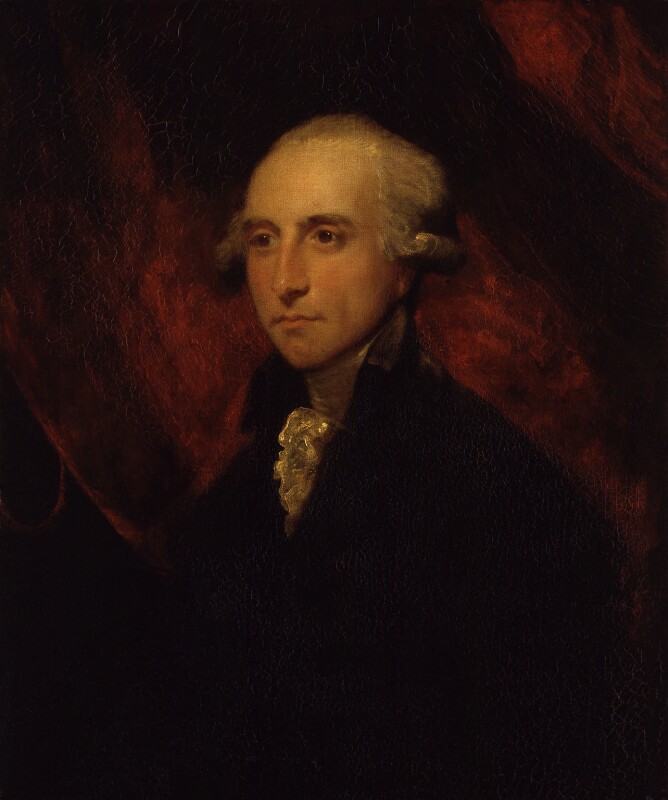 The portrait and its companion of his friend George Cholmondeley have been described as 'the last two portraits of gentlemen that he ever painted …' (Edmond Malone, Reynolds, 1797, I, lx) though this may not be exact as Reynolds continued to paint until his eyesight began to fail in 1789-90 - the lettering on William Lane's engraving of C. J. Fox describes this as 'Sat for in the Year 1790 The last from the hand of Sir Joshua' (Edmond Malone, Testimonies, 1792, p 89). The date of the sitting has previously been uncertain; an early sitting in February 1784 had to be cancelled and various appointments, possibly social visits only, are recorded up to September 1789 (Martin Davies, The British School, National Gallery Catalogue, 1946, p 115, no.128). Windham himself recollected the sitting years later in connection with a mental arithmetic exercise (Diary, 9 January 1797). However the exact date is firmly recorded by Lord Minto who visited Sir Joshua on 8 March 1787 and found Windham sitting; later, on 3 January 1788 he visited again and described the portrait itself: 'His picture is a good head, and has a very strong and lively expression of his countenance and character, but does not appear so perfect as Sir Joshua's masterpieces'. At the RA that year he compares it with the portrait of Lord Heathfield: '... and Windham is extremely fine also for likeness and character, but is not so magnificent a subject or style as the other' (Life and Letters of Sir Gilbert Elliot, First Earl of Minto, 1874, I, pp 136, 187, 200). It was part of an exchange agreement with George Cholmondeley whose portrait by Reynolds has been at Felbrigg Hall since at least 1812 (exhibited RA 1790 and mezzotint by Jones 1790). The Windham portrait was compared with that of Sheridan at the RA exhibition of 1789: 'the two portraits … are so like the originals that they seem almost alive and ready to speak to you. Painting in point of resemblance can go no further' (Sir James Prior, Life of Malone , 1860, p 388).
A copy attributed to Hoppner was at Christie's 28 October 1949 (159).

Commissioned by the sitter and given probably immediately to G. J. Cholmondeley who bequeathed it to the National Gallery in 1831; transferred to NPG in 1883 on loan.