18 of 689 portraits by Sir Thomas Lawrence 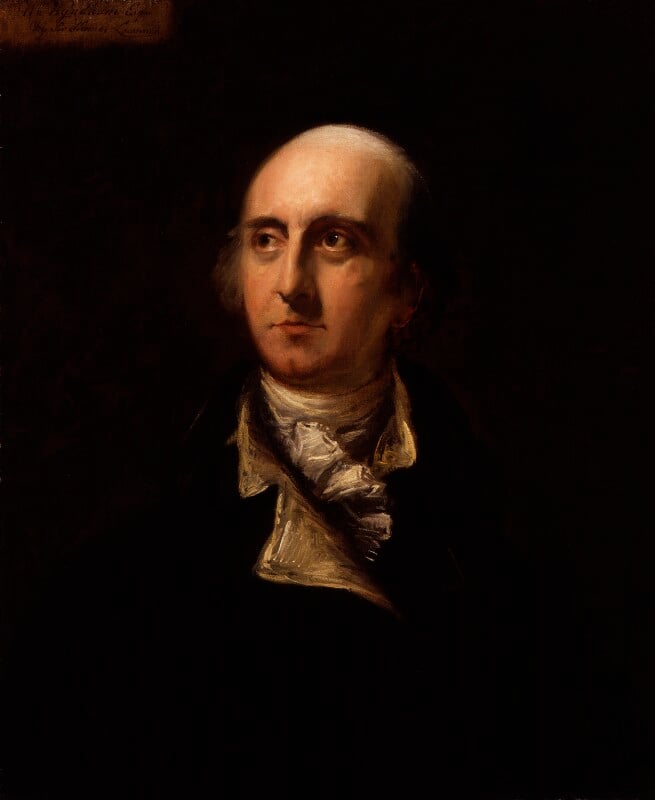 Inscribed upper left in cursive script: Wm Wyndham Esqr/By Sir Thomas Lawrence, and above the head indistinctly and again on the stretcher in ink: Presented to me by/Domc Colnaghi Esqre/Octr 14 1843/C. Turner.

The provenance of the picture was explained in a letter from P. & D. Colnaghi to Sir George Scharf: 'the portrait ... was bought by Mr D. Colnaghi with several other canvases at the sale of Sir Thomas's effects; it being in a very dirty state he had it cleaned; Mr Charles Turner, the mezzotint engraver, seeing the Picture, expressed a strong wish to have it as a memento of his late friend. Mr Colnaghi being upon very friendly terms with Mr Turner made him a present of the Picture (vide autograph on the stretching frame). About two years since Mr Colnaghi, wishing to repossess the Picture, made an exchange with Mr Turner for another sketch by Lawrence. Sir Thomas left the Picture unfinished not being satisfied with it; he painted another in a different position from which Reynolds made the Engraving sent with the Picture ...' (letter of 17 May 1858 in NPG archive).
From this account it would seem that NPG 38 was an unsatisfactory attempt to paint a portrait commissioned by the City of Norwich after Windham's defeat in the election of 1802; he had been their MP since 1784. The first mention of the sitting is in Windham's Diary for 3 August 1802: 'went by appointment to Lawrence', but because of Lawrence's dilatoriness the portrait was never finished and Norwich decided on a whole-length by Hoppner instead (Diary of Joseph Farington, 25 March and 24 May 1803). Letters between Windham and his agent in Norwich, Thomas Amyot, and to Lawrence himself, describe the difficulties, Windham eventually offering 'to sit every day for as many hours as he should like' (The Windham Papers, ed. Lord Rosebery, 1913, II, pp 205-8). However Lawrence did manage to achieve an alternative in time for the RA exhibition in May 1803, showing the subject in a different pose to NPG 38 – three-quarter-length to right in the attitude of speaking in the House of Commons. It was engraved in mezzotint by S. W. Reynolds (British Museum and NPG impressions undated) from whose studio it was extracted in 1810 at Windham's death (Diary of Joseph Farington, 4 June 1810); it was later acquired by University College Oxford (R. L. Poole, Catalogue of Oxford Portraits, II, pp 10-11) and a copy by Jackson is at Felbrigg Hall. The unsuccessful NPG 38 remained in Lawrence's studio until his death when it was picked up at one of his sales by Dominic Colnaghi.