3 of 20 portraits of Peg Woffington 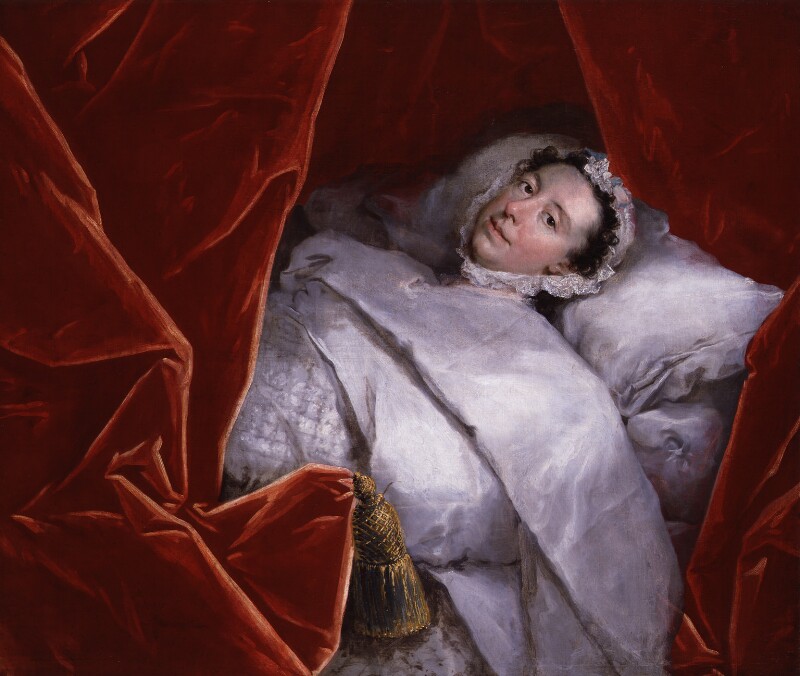 Scharf's note of 1880 begins 'Peg Woffington (in bed) when paralysed obt. 1760 aet [?]12 by Arthur Pond'. [1] Previously attributed to Pond, the visible head is fairly close to the engraving by McArdell of Pond's bust of her holding a posy, though the handling is more fluent than his known work. The rest of the picture consists of rather coarsely painted drapery, perhaps too coarse for the brothers Vanhaecken who were employed by some of the leading London portrait painters. [2] The picture, nevertheless, is not far from, though not by Cotes or Hudson. An x-radiograph taken in 1970 seemed to reveal a pair of pupils directed vertically upwards and an older face, suggesting that the portrait may have been one of another sitter adapted to represent Peg. The sick-bed theme is rare in English 18th-century portraiture, however, and further tests prior to cleaning in 1975 do not indicate that NPG 650 began life as a portrait of a different sitter. The 'pupils' turn out to be highlights on the rim of the present pupils, while the apparent difference in age is probably no more than the difference between underpaint and surface. If this conclusion is correct, the portrait must have been painted after Peg Woffington took to her bed after her collapse on 3 May 1757.

Rather rubbed, e.g. along her right cheek; a number of old damages in the background, including a triangular tear above the sitter's head; three old relinings and one strip lining, surface cleaned and varnished, 1889; cleaned and relined, 1975.

1) Scharf's annotated sale catalogue, NPG archives. Lot 156A must have been an addendum; it is not printed in the catalogue.