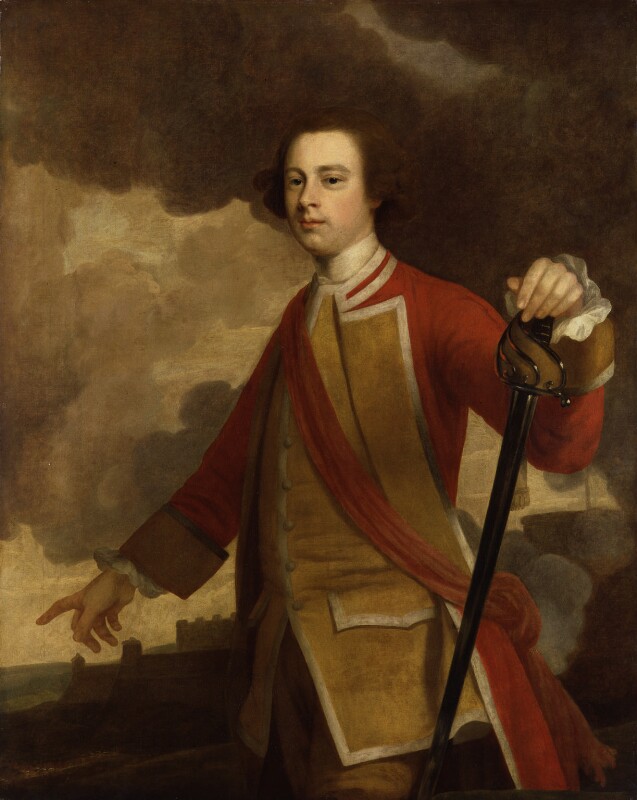 Ascribed by the vendor to Gainsborough [1] and in earlier NPG catalogues to Highmore, NPG 1111 appears to derive from the head of c.1744 by an unknown artist at Squerryes Court during its 'red hair' period, 1777-1822 (see All Known Portraits). The technique is of c.1770. The portrait is perhaps a commemorative commission for one of the regiments in which Wolfe served but in the present state of knowledge it is not possible to be more precise [2] other than to note that since the sash of the period would have been of net, and not of the thick material depicted, the dress is unlikely to represent a contemporary uniform. The absence of buttons may mean no more than that the picture remained unfinished. The identity has from time to time been questioned and in 1924 the portrait was withdrawn from exhibition in the belief that the sash was the ribbon of the Bath. It was re-instated in 1959. Wolfe's younger brother Edward has also been suggested but a posthumous demand for portraits of this young man, only a subaltern in 1744 when he met his death, seems most unlikely. The closeness to the Squerryes head should dispose of doubts concerning the identity.

1) Apparently mistaken for the head and shoulders once known as the sitter, now at Foxwold from Mrs Gibbon's collection, at Christie's, 5 May 1883, lot 23.
2) Among other suggestions Lt-Col. Ormond mentions the 20th foot (Lancashire Fusiliers) in his correspondence, 1913, NPG archives; for discussion, see J. F. Kerslake, 'The Likeness of Wolfe', Wolfe, Portraiture & Genealogy, Quebec House, 1959, pp 33-35.