1 of 7 portraits by Joseph Wilton 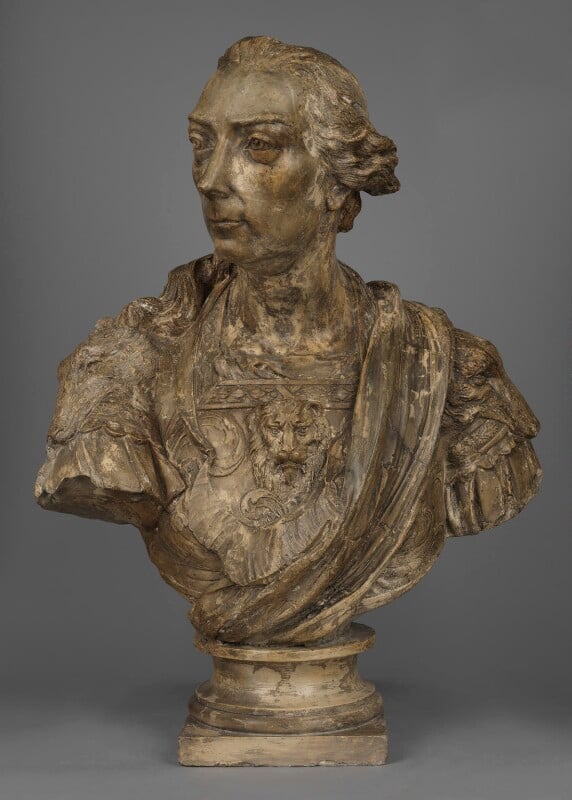 NPG 4415 is apparently the earliest and least idealised of surviving busts by Wilton. The original was possibly a commission from the Duke of Richmond who 'had a mind to have a statue of General Wolfe. Wilton, the statuary went down to Portsmouth, [1] and opened the coffin newly brought over to try to take off his face but it was too much distorted. They found out a servant of Lord Gower who was like Wolfe, and Wilton was ordered to model his face, and Lord Edgcumbe was to correct it from memory.' [2]
After a successful period of study in Rome, Naples and Florence, Wilton (1722-1803) returned to England in 1755, and in 1758, with his friend Giovanni Battista Cipriani, the decorative painter, was chosen co-director of the gallery of painting and sculpture opened 'for gratuitous instruction to students' by Charles Lennox, 3rd Duke of Richmond and Lennox, in his house at Whitehall. [3] No bust is recorded at Goodwood, and if one had been completed for the Duke, it was perhaps lost in the fire of 1791 which destroyed the London house. The only 'statue' known is the monument of 1772 in Westminster Abbey (see All Known Portraits).
A comparison with the fine marble, undated but inscribed with the artist's name, at Dalmeny [4], and the bronze cast from the Westerham plaster (see NPG 2225), shows the head in NPG 4415 less erect and a differently shaped gorget lying bent between the planes of the curiass and sash. The Westerham type lacks the gorget. All Wilton's surviving sculpture have the sloping forehead and receding chin of Smyth's profile. [5] NPG 4415 appears to be the most naturalistic in treatment.

Colour variations between dark grey and light putty suggest use of paint when executed; small cracks in his left shoulder and elsewhere.