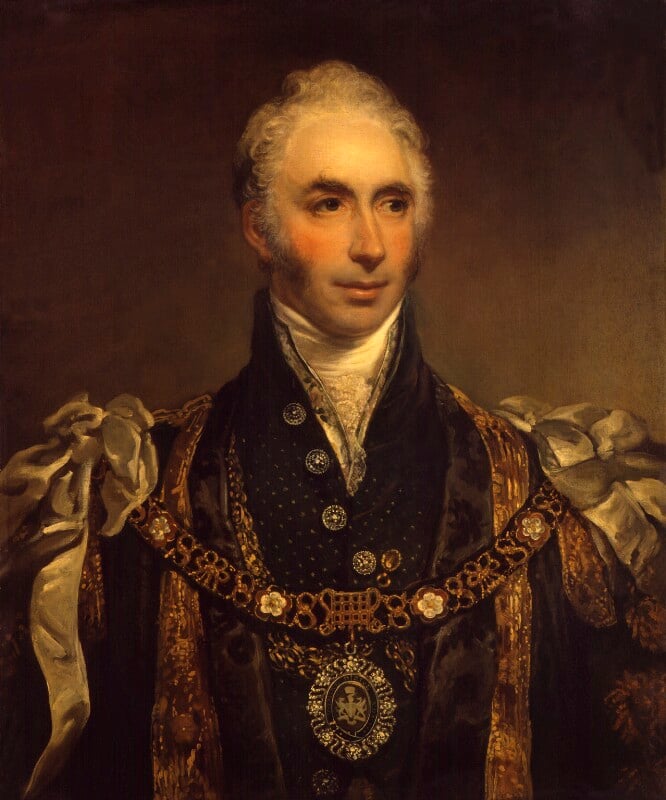 The portrait was painted either in 1815 to celebrate the Alderman's election as Lord Mayor of London or in 1816 when Wood's rescue of three innocent Irishmen condemned to be hanged made a considerable impression. The event was specially mentioned in Say's mezzotint which was used for Halliday's medal: 'a profile likeness in bronze colour by Myers and a most excellent three-quarter mezzotinto engraving that has recently been published for the benefit of the three unfortunate Irishmen ...' (letter from the Rev George Bates, Chaplain to the Lord Mayor, 21 January 1817, cited in Sir E. Thomason, Memoirs During Half a Century, 1845, I, p 140). Charles Lamb composed a sonnet to Wood published in Thelwall's paper The Champion, May 1820, 'Hold on thy course uncheck'd, heroic Wood!'

Family possession, then the Sussex Goldsmiths & Silversmiths Co, Brighton and bought from there 1907.

Mezzotint by William Say 1816 lettered: THE RIGHT HONble MATTHEW WOOD/TWICE LORD MAYOR OF LONDON 1815 AND 1816./Published London Jany 1st 1817 by Boydell & Co. Cheapside. - for the Benefit of the three Irishmen rescued from an Ignominious Death by the exertions of his Lordship. Stipple engraving by Cooper Copied (by Permission of the Worthy Alderman) from an Original Print … and published by Thomas Kelly 1821.