3 of 22 portraits by Dante Gabriel Rossetti 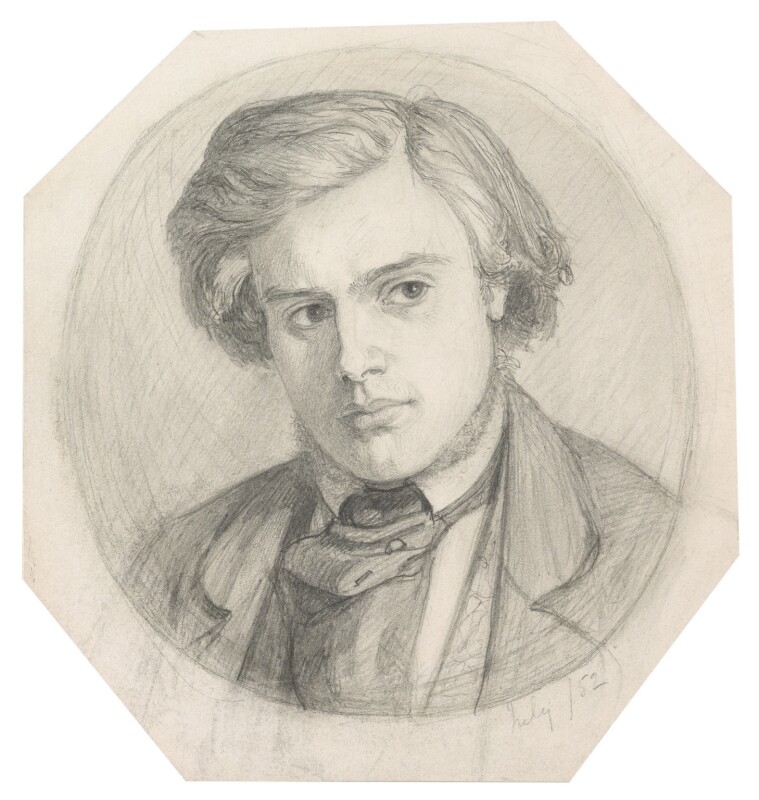 Woolner and Dante Gabriel Rossetti were studio neighbours in 1847, and the earliest (if indirect) reference to the sculptor in Rossetti’s correspondence was in January 1848. [1] Woolner was one of the seven members of the Pre-Raphaelite Brotherhood, and the only sculptor among them. The PRB was formed around 1848 and early 1849.

In 1852, partly on the rebound after the rejection of his proposal for the Wordsworth monument, Woolner decided to try his fortune prospecting in Australia. He was waved off by a group of PRBs as he boarded ship at Gravesend on 15 or 16 July. Rossetti described the scene to William Bell Scott:

The most important event among us lately has been Woolner’s exodus to the diggings. I saw him on board the vessel on Thursday. He is accompanied, as I think you know, by Bateman & Bernhard Smith – all of them plentifully stocked with corduroys, ‘sou-westers,’ jerseys, fire-arms, and belts full of little bags to hold the expected nuggets. […] All Woolner’s friends congratulate him on the move, with the sole exception of Carlyle. [2]

Days before the departure Rossetti had made a drawing of Woolner, NPG 3848, a record of his friend before an uncertain and extremely hazardous expedition. Soon after he presented the drawing to Woolner’s friend and patron Mrs Eliza Orme. ‘I have spent several evenings with the Ormes since you left, in company with William and sometimes Christina,’ he wrote in a New Year letter, ‘and indeed, I think we may now consider ourselves in the circle of family friends. […] I gave Mrs Orme my sketch of you and she has had it framed and hung up.’ [3]

Woolner was away for over a year during which Rossetti kept his memory alive by organizing a ‘grand meeting of Woolner’s friends, when each is to make a drawing to be sent to him in Australia’. [4] He returned in October 1854, and Rossetti reported to William Allingham: ‘Woolner is back. Rather broader and stouter, and certainly looking healthier, but unaltered otherwise. [I was surprised by his] manner, which I expected perhaps to find a little changed & sobered, but it is just the same.’ [5] Amy Woolner wrote in the edition of her father’s letters, retrospectively, ‘so Woolner returned to England from his gold-digging adventures, the hard open-air life had done him a world of good, both in health and spirits […]. He was little changed in appearance, and the frontispiece [NPG 3848] represents him as he then was.’ [6]

Woolner’s own opinion was that it was a ‘careful’ likeness. In 1886, in response to an enquiry about portraits he wrote to Harry Quilter: ‘Rossetti did a very careful pencil likeness of me in 1852 which is now in the possession of Mrs Charles Orme, Bedford Park, and I have no doubt she would lend it to you if you wished.’ [7]

The drawing, which is unsigned, was catalogued as a work by Holman Hunt in the 1952 Sotheby’s sale, on the evidence of the inscription on the backboard. It was examined by the collector Adolph Oppé, who advised that it was indeed by Rossetti, a view confirmed in Rossetti’s letters, and it was acquired as such by the Gallery in 1953. [8] The attribution was verified by Virginia Surtees (see Surtees 1971, no.539).

For Rossetti’s other sketches and caricatures of Woolner see ‘All known portraits’.