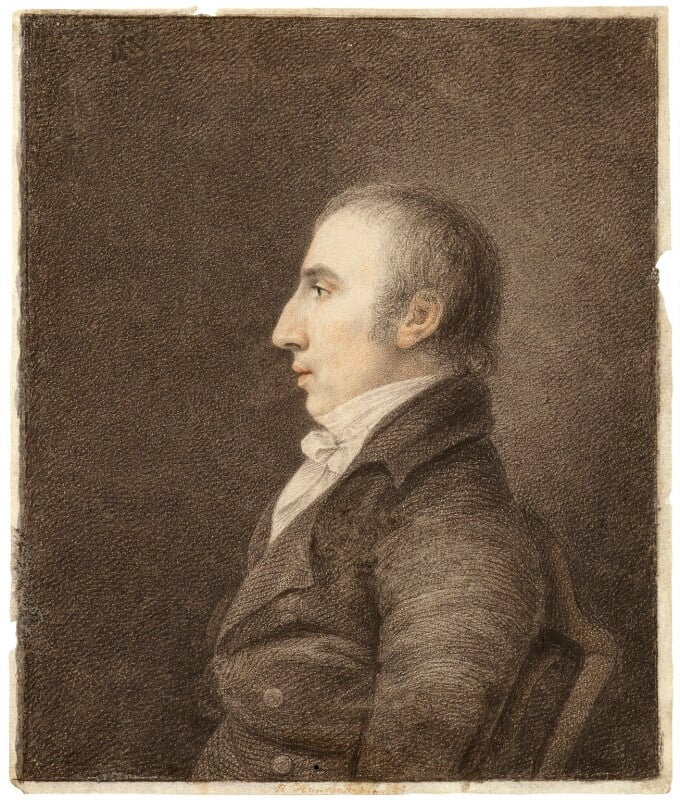 Inscribed on the back in ink, probably by Cottle: William Wordsworth/by Hancock 1798.

Wordsworth was the oldest of a group of young poets whose portraits were commissioned by their Bristol publisher, Joseph Cottle, bookseller and minor poet himself, whose good fortune it was to give a fair start in their literary lives to Coleridge, Lamb, Southey and Wordsworth himself. Cottle is remembered not at all for his poetry but a great deal for his two books of reminiscences which contain unique glimpses into the youth of the Lake poets. The artist employed was the Worcester porcelain decorator Robert Hancock, living in Bristol in the 1790s, and the drawings, possibly intended for porcelain but more likely for engravings, remained in Cottle's possession to the end of his life. Mary Wordsworth saw them in Cottle's 'sanctum' in about 1828-9: 'we were favoured with a sight of the Portraits - to the best of my recollection we were most pleased with that of Southey ... Dora said that of her Father reminded her of her Brother John' (Correspondence of Crabb Robinson with the Wordsworth Circle, ed. Morley, 1927, I, pp 322-3). Crabb Robinson also saw them with her and wrote his impressions to Wordsworth in September 1836: 'you have taken abundant care to let the world know that you did not marry Mrs Wordsworth for her beauty. Now this picture will justify the inference that she too had a higher motive for her acceptance of you' (ibid., p 316). Southey of course remembered the portrait well and while Cottle was writing his Early Recollections and considering the matter of illustrations, Southey wrote to him on 1 November 1836: 'I saw Wordsworth on my way and mentioned your wish about engraving his portrait. He referred it entirely to my opinion of its likeness.' Cottle added a note: 'Mr Southey deemed it an admirable likeness of Mr Wordsworth as he appeared in younger life and said that it bore at the present time a striking resemblance to Mr Wordsworth's son' (Reminiscences, p 413).
To modern eyes the drawing looks stolid and wooden and inadequate to house the spirit whose cry in the early days of the French Revolution, 'Bliss was it in that dawn to be alive,/But to be young was very heaven,' crystallises the Romantic Movement. But then as Max Beerbohm says, 'so few people look like themselves'. Certainly Hancock's effort conveys no idea of the 'gaunt Don Quixote-like figure' in striped pantaloons described by Hazlitt who first met him in 1798: 'a fire in his eye (as if he saw something in objects more than the outward appearance), an intense high narrow forehead, a Roman nose, cheeks furrowed by strong purpose and feeling, and a convulsive inclination to laughter ...' (My First Acquaintance With Poets).

Commissioned by Joseph Cottle and inherited by his niece who sold it at Sotheby's in 1864; Messrs Fawcett & Noseda c.1865; Lieut.-Colonel Francis Cunningham and his sale Sotheby's 10 May 1876 (548), bought by W. W. De la Rue who sold it to the NPG together with similar portraits of Coleridge, Lamb and Southey.