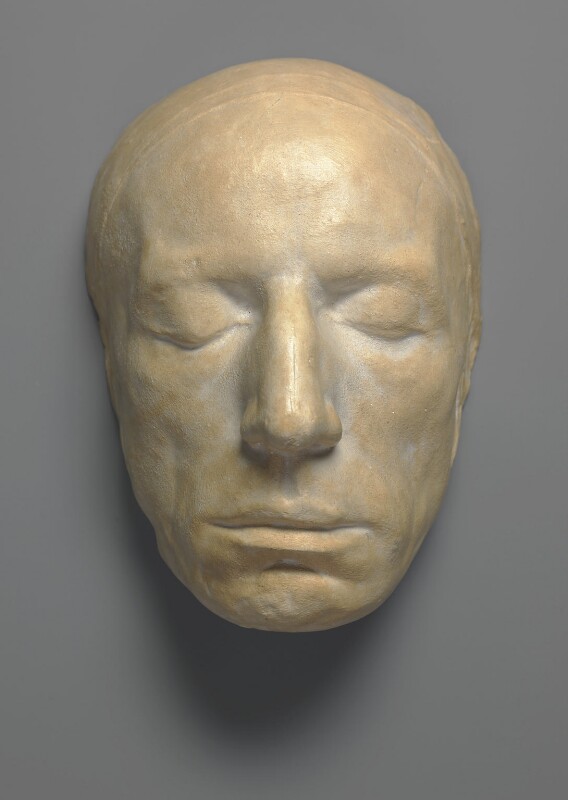 The mask was taken partly because of Haydon's interest in sculpture, partly because of the contemporary obsession for phrenology. The scene was described by Haydon in his Diary for 13 June 1815: 'I had a cast made yesterday of Wordsworth's face. He bore it like a philosopher. Scott [John Scott, editor of The Champion] was to meet him at Breakfast. Just as he came in the Plaister was covered over. Wordsworth was sitting in the other room in my dressing gown, with his hands folded, sedate, steady, & solemn. I stepped in to Scott, & told him as a curiosity to take a peep, that he might say the first sight he ever had of so great a poet was such a singular one as this./I opened the door slowly, & there he sat innocent & unconscious of our plot against his dignity, unable to see or to speak, with all the mysterious silence of a spirit./When he was relieved he came into breakfast with his usual cheerfulness and delighted & awed us by his illustrations & bursts of inspiration' (Diary, ed. Pope, vol.I, p 450).
Other versions are known in the Ashmolean Museum, in Dove Cottage, in St John's College Cambridge, in Torre Abbey Torquay, and probably elsewhere. One of these copies was used by Frederick Thrupp for the statue in Westminster Abbey (not, as Gunnis states, from a non-existent death-mask taken by Chantrey, who in any case had died nine years before Wordsworth). A closely related pencil drawing, possibly made from the mask by Haydon, was offered to the NPG in 1909 by A. Anderson of Glasgow; another with eyes open was at Sotheby's 5 April 1973 (23) and again Christie's 17 November 1981 (84) illustrated. They were all connected, as was Haydon's mask of Keats (NPG 686), with the crowd of onlookers in his 'Christ's Entry into Jerusalem', and later on developed into the famous portrait known as 'Wordsworth on Helvellyn' (NPG 1857).