9 of 34 portraits by Benjamin Robert Haydon 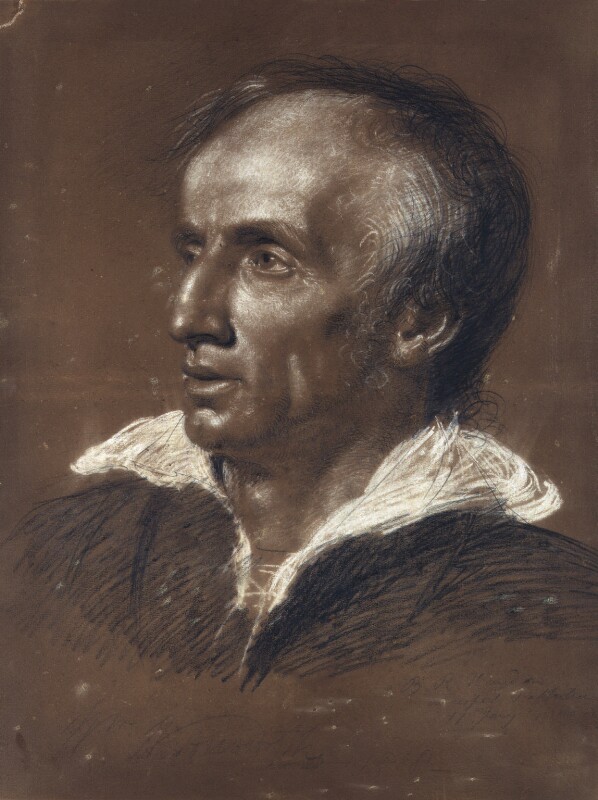 The unusual idea of a portrait from the hand of the inflated history painter, B. R. Haydon, was first mentioned in a letter from Sara Hutchinson to Dora Wordsworth, 4 January 1818: 'Mr Haydon intends to make a chalk drawing of your Father for your Mother-' (Frances Blanshard, Portraits of Wordsworth, 1959, p 59). The sitting took place on 15 January and was recorded in Haydon's Diary: 'Wordsworth sat to me for a chalk drawing of his head. He sat like a Poet and Philosopher, calm, quiet, amiable. I succeeded in a capital likeness of him, and when it is framed I shall send it to him as a mark of my affection - he was the first who wrote me a sonnet - when such a thing was indeed an elevation.' A sonnet was also written on the drawing itself by George Stanley, 'On Seeing the Portrait of Wordsworth by Haydon', inspired at the exhibition in Spring Gardens and published in Annals of the Fine Arts, III, 1818. Haydon wrote on 12 September 1818: 'with respect to the Drawing I did of your head, I am happy to tell you, it met with universal public approbation - and was considered by a great many as the best sketch I had ever made of anyone ...' (Letters of William and Dorothy Wordsworth, ed. Ernest De Selincourt, revised by Shaver, Moorman & Hill, p 577n). It hung for a time in Thomas Monkhouse's house in London and arrived at Rydal about a year later: 'Your most valuable Drawing arrived, when I was unable to enjoy it as it deserved [bad eyesight] … much admired as a work of art; some think it a stodgy likeness; but in general it is not deemed so - for my part I am proud to possess it as a mark of your regard, and for its own merits' (letter from Wordsworth to Haydon 16 January 1820). Elsewhere he described it as 'the brigand' and Dora Wordsworth disliked it intensely: 'a fine drawing - but what a likeness! All that there is of likeness makes it to me the more disagreeable'. However Mary Wordsworth treasured it and it hung in the dining-room until Wordsworth's death when she asked his solicitor and literary executor, William Strickland Cookson 'to choose a picture from the collection'. Cookson chose Haydon's chalk drawing but Mrs Wordsworth said, 'Nay, Strickland, I cannot let that go while I live' (Frances Blanshard, Portraits of Wordsworth, 1959, p 149). She bequeathed it to Cookson whose granddaughter gave it to the NPG in 1950.

Head and shoulders to left.

William Wordsworth; given by Mary Wordsworth to W. S. Cookson; given to the NPG by his granddaughter Mrs Silvia St Hill 1950.