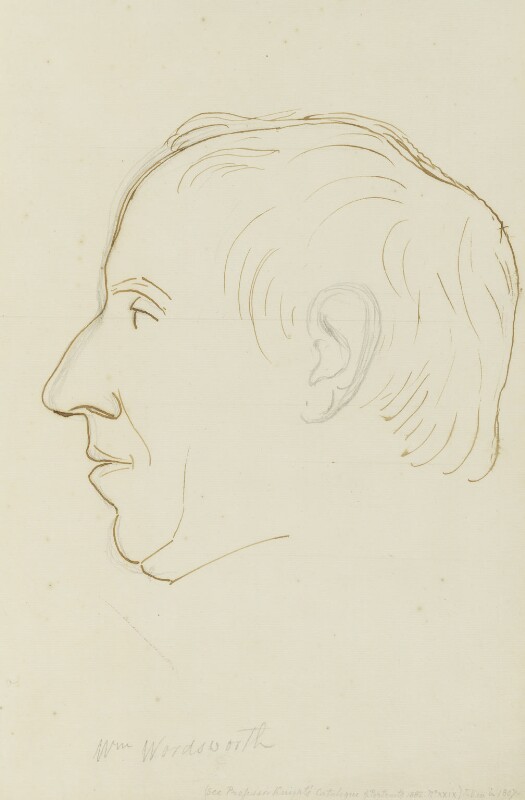 Inscribed in pencil: Wm Wordsworth and below in Scharf's handwriting: (See Professor Knight's Catalogue of Portraits 1882 No XXIX) taken in 1807.

Sir Francis Chantrey’s Ledgers of Accounts (p 118) record an order of 1820 'from Sir George Beaumont Bart. for a Bust of Wordsworth the Poet/1822 To executing ditto £126'; the account was settled in 1822 for 100 guineas, unusually cheap for Chantrey at this time. The date of the sitting is fixed by a letter from Wordsworth to Coleridge, 8 July 1820: 'My last attack was a Stye (do I spell this right?) with bloodshot ... I regret very much having seen so little of you; but this infirmity and my attendance at Chantrey's for my Bust, and numerous other engagements have stood in my way' (Letters of William and Dorothy Wordsworth, ed. Ernest De Selincourt, revised by Shaver, Moorman & Hill, III, p 615 and note). The plaster model is in the Ashmolean Museum (665-153), exhibited RA 1821 (1134) and 'Sir Francis Chantrey', NPG, 1980 (13). The marble bust, signed and dated 1820, was sold from the Beaumont Estates in 1956 and is now in Indiana University. Several plaster casts were made and Edward Moxon owned a bronze cast.
Scharf's mysterious pencil inscription at the foot of the page - taken in 1807 - has not been explained unless it refers to Knight's draft entry, later altered for No.XXX in which the drawing is not mentioned. There is plenty of evidence for the sitting in 1820 and none at all for 1807 when Wordsworth would have been only 37, surely too young for Chantrey's drawing.
The marble bust was generally approved, Wordsworth ordering seven casts at four guineas each and thought of taking several dozen. Coleridge though it 'more like Wordsworth than Wordsworth was like himself' and for comments by Beaumont, Crabb Robinson, Hazlitt and Mary Wordsworth, and for the tiff with Scott about wrinkles, see B. R. Schneider, 'Wordsworth Portraits: a Biographical Catalogue' in The Eagle, St John's College Cambridge, LIV, 1950, no.237, p 122, Frances Blanshard, Portraits of Wordsworth, 1959, pp 61-4 and the entry by Alex Potts in the Chantrey Exhibition Catalogue, NPG, 1980, p 21. Frederick Thrupp described Chantrey's bust as 'too smoothly shaven and chiselled, is done in his most mannered style, without mental expression' (W. A. Knight, Life of Wordsworth, 1889, XXXIII). Modern opinion is more relaxed: 'some may think it over-prettified, over-smooth, but for me it seems just what the ideal bust in marble should be for such a subject' (David Piper, The Image of the Poet, 1982, p 124).