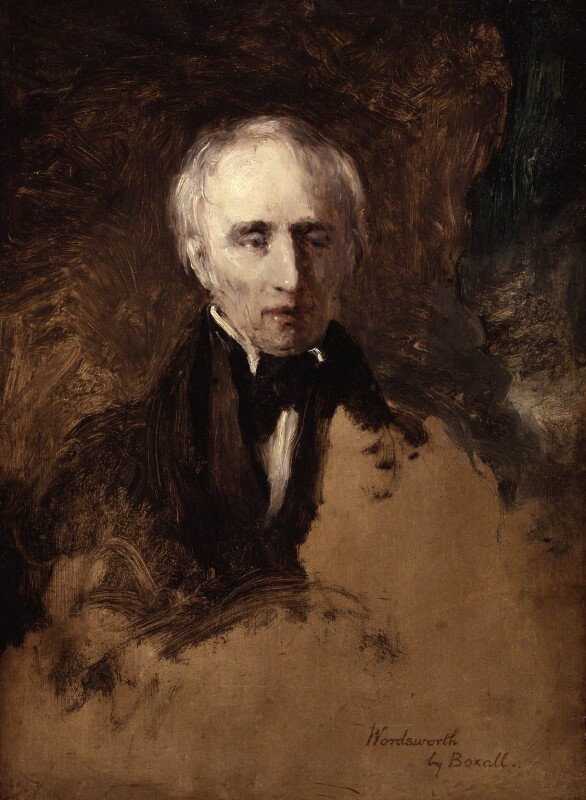 The sketch was a preliminary study for an oil still in the Wordsworth family possession (Frances Blanshard, Portraits of Wordsworth, 1959, pp 154-5). The first sitting to Boxall, whose first portrait it was, probably took place on 17 March 1831, the finished picture being ready early in 1832 (Letters of William and Dorothy Wordsworth, ed. Ernest De Selincourt, revised by Shaver, Moorman & Hill, V, p 372). No one except Dorothy seemed to like it, though Edward Quillinan (Dora's husband) condescended to describe it as 'perhaps not the most striking likeness in the world, but it is a likeness, thoughtful and poet-like'. Wordsworth himself told John Gardner that 'it has mortified me much that I cannot get any of my Friends and Acquaintances to be pleased with [it] or the Print - both of which they say are much too dark and gloomy ...'. The finished portrait was engraved in mezzotint by Bromley: 'except for my sister I cannot get anyone to look at it with pleasure'.
The sketch is a great deal more free and relaxed and contains something of 'the presence of poetry' expected by a reviewer in The Athenaeum, but also something of the presence of death and probably for that reason remained in the artist's studio and then in the possession of Ouless and his daughter. It was one of Mrs Blanshard's 'discoveries', unrecorded by either W. A. Knight, Life of Wordsworth, 1889 or B. R. Schneider, 'Wordsworth Portraits: a Biographical Catalogue' in The Eagle, St John's College Cambridge, LIV, 1950 (see Blanshard, Portraits of Wordsworth, 1959, p 140).

Given by the artist to his pupil Walter William Ouless whose daughter, Catherine Ouless, bequeathed it in 1961.