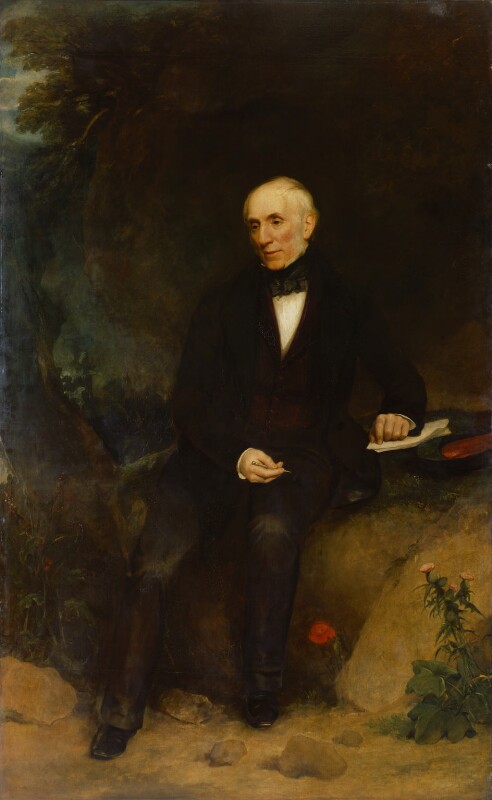 The portrait was probably painted posthumously as a business venture (Frances Blanshard, Portraits of Wordsworth, 1959, p 102) and makes use of a chalk drawing of the head 1832 and a three-quarter-length oil 1832-3 both in St John's College Cambridge, and the subject of Wordsworth's sonnet Go faithful Portrait! Four small copies were made for the family and friends, possibly by Pickersgill's son, and a variant of 1840 for Sir Robert Peel, now at Dove Cottage. The NPG whole-length shows the poet in a formal black suit instead of his academic robe and was exhibited RA 1851 where it was seen by Sara Coleridge who echoed the general dislike: 'Pickersgill's portrait of our dear departed great poet is insufferable - velvet waistcoat, neat shiny boots - just the sort of dress he would not have worn if you could have hired him - and a sombre sentimentalism of countenance quite unlike his own look, which was either elevated with high gladness or deep thought, or at times simply and childishly gruff - but never tender after that fashion, so lackadaisical and mawkishly sentimental' (Memoirs and Letters of Sara Coleridge, 1873, II, p 416). The modern verdict is unchanged: '… the average portraits of him in the later years of his life, apart from Haydon's, seem trite and almost impertinent. Pickersgill's painting in the NPG … is better than most, yet it is tame and shows the poet tamed' (David Piper, The Image of the Poet, 1982, p 124).
If Pickersgill had hopes of making a fortune from it they were dashed. The NPG eventually offered him £100 which he accepted 'with some reluctance and it is only under the consideration of it being preserved to all time' (letter to Scharf 9 June 1860 in NPG archive). Knight listed it as a replica of Peel's portrait, Schneider as a variant, and Mrs Blanshard was the first to notice the significance of the 'shiny boots' mentioned in Sara's letter, thus fixing it as the portrait exhibited at the RA in 1851.