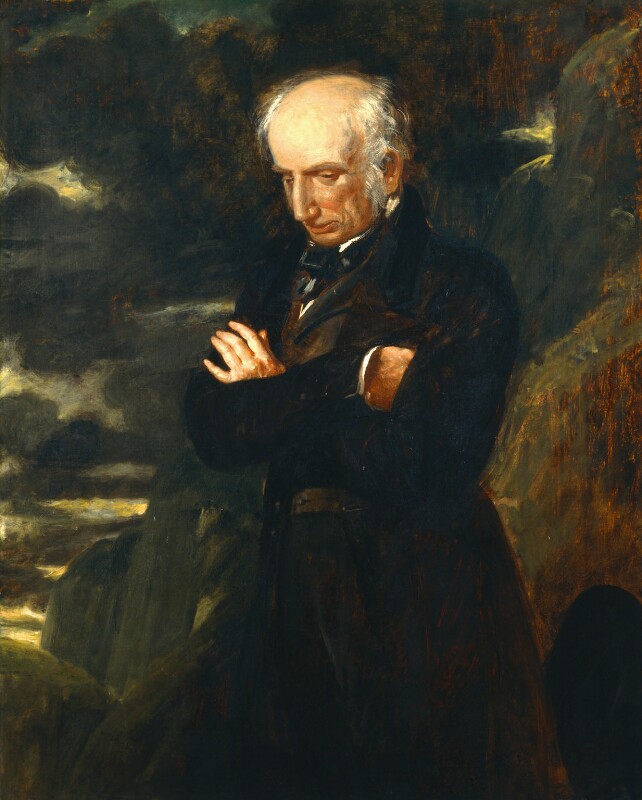 The portrait, known colloquially as 'Wordsworth on Helvellyn', was painted to commemorate the poet composing the sonnet on Haydon's picture, 'Wellington musing on the Battlefield of Waterloo', finished in 1839 (NPG L152(3)). Haydon had sent him an engraving of it in August 1840 but it may also have been an expression of his admiration of Wordsworth's ability to climb Helvellyn at the age of 70. The sonnet, By Art's bold privilege, 'was actually composed while I was climbing Helvellyn last Monday ... and a magnificent day we had' (Wordsworth to Haydon 4 September 1840). Haydon looked on this sonnet as a climax in his life and determined to paint the poet in romantic mood, 'a likeness of me, not a mere matter-of-fact portrait, but one of a poetical character ... in some favourite scene of these mountains' (Wordsworth to Henry Reed January 1841). The sittings took place in London over a year later and are reported in Haydon's Diary for 14-16 June 1842, the background being painted later from memory. It was finished by October and at the request of Mary Mitford sent to her friend Elizabeth Barrett (Browning) who wrote a sonnet herself, Wordsworth upon Helvellyn, thus achieving a typical Victorian exchange between literature and art - a poem on a picture of a poet composing a poem on a picture.
Wordsworth approved of both the picture and Miss Barrett's sonnet: 'The conception of your sonnet is in full accord with the Painter's intended work' (letter to Elizabeth Barrett 26 October 1842) and later he wrote to Haydon about Lupton's mezzotint: 'Pray let me have a few impressions, when it is finished, sent to Moxon [his American publisher], as I myself think that it is the best likeness, that is the most characteristic, which has been done of me' (letter to Haydon 24 January 1846).
Wordsworth's letter of July 1843 mentioning 'the Picture you are doing of me upon Helvellyn' presumably refers to Haydon's unfinished seated portrait, at one time belonging to Haydon's friend Francis Bennock who offered it to the NPG in 1889, later acquired by John Wordsworth, Bishop of Salisbury, and now at Dove Cottage (Frances Blanshard, Portraits of Wordsworth, 1959, XLII).
Just before Haydon's death, overwhelmed by debt and disappointment, he sent NPG 1857 to Mrs Browning again, 'to protect', that is to say to evade the bailiffs. After his gruesome suicide it was sent to Kendal and bought by Cornelius Nicholson who bequeathed it to the NPG in 1889; the Trustees declined the bequest on the grounds of 'vagueness of the forms and vastness of the canvas' and it became the property of his daughter Cornelia who offered it in 1891 to St John's College Cambridge, who also declined. She then sold it to the Wordsworth family and it was finally bequeathed by John Fisher Wordsworth, as desired by his wife Violet (Wordsworth's great-granddaughter), and accepted in 1920.

Mezzotint vignette of the head only by Thomas Lupton 1848, with facsimile of Wordsworth's autograph below the line 'I see what was, and is, and will abide,' from the last sonnet On the River Duddon.